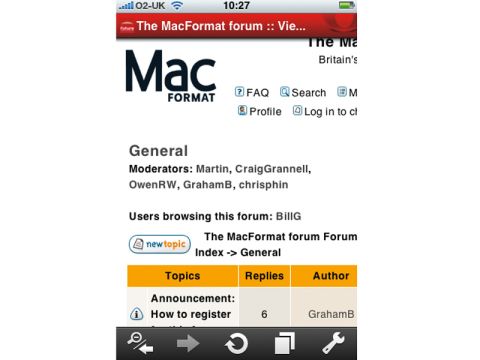 It may not topple Safari for features, but for speed Opera Mini has the edge

Great for most web browsing, but not as elegant or consistent as Apple's Safari

We joined the rest of the world in slack-jawed amazement when Opera Mini popped up on the App Store.

Compared to Safari, it's like your iPhone has had a processor upgrade, especially over 3G, EDGE or GPRS. Pages load so quickly you will be amazed, but there have been some sacrifices made here.

First of all, there's only one level of zoom, so the web page either fills the screen or you zoom in to a fixed reading level. All text is rendered in the same font, making pages look a bit ugly.

Scrolling up and down is also an issue. Safari forces your scrolling to be either vertical or horizontal; in Opera Mini it's more like ice skating for the first time – you never quite know where you're going to end up.

Opera Mini achieves its speed by routing all its web traffic through its servers in Norway, where images are heavily compressed, which also means it costs you less if you're on pay-as-you-go since less data is being downloaded.

Unfortunately, it also means that sites detect your login as coming from somewhere that's not your usual location (unless you actually live in Norway). So Facebook, for example, freezes a UK account if you log in through Opera Mini.

Despite the flaws, there are a few nice features here beyond raw speed – the start page with its quick links, and a passable attempt at tabbed browsing – but we soon found ourselves returning to Safari when on Wi-Fi, just to make pages more readable again.