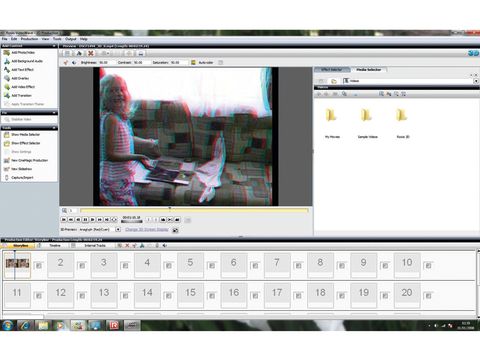 3D is something of a gimmick, but you don't need a new monitor to enjoy it

Roxio's Creator 2011 sets itself a worthy collection of goals: to help us enhance, preserve, capture and share video content. A sceptic would claim they could do all of this with a rag-tag collection of freeware, but don't be too quick to judge.

Creator 2011 has its faults and gimmicks, but it's still a huge collection of programs with brilliant features.

Let's kick off with the main gimmick: Roxio has caught the 3D bug. With a few clicks and some computational heavy lifting, you can transform 2D family videos into 3D films. Don't expect Roxio's algorithms to make a wet weekend in a Wales look like Avatar, though. The net result of the 3D video processing system is simply a family film with an added dimension of fun.

The same goes for photographs – with a little help, the otherwise mundane can be made almost magical.

If you're more interested in features that are staunchly useful, look no further than Creator 2011's clever video rotation system. Smartphones make it easy to shoot in both landscape and portrait modes, but widescreen TVs are less forgiving and much more difficult to turn through 90 degrees. Roxio Creator 2011 enables you to solve this problem with a single click.

Admittedly, such an effect is easy to achieve with other software, but all credit to Roxio for removing the need to pass project files through multiple programs before you're ready to burn or publish a movie.

New to Creator 2011 is image stabilisation. Footage shot on your iPhone might look fine on a tiny screen, but show it on your 32-inch monitor and suddenly your videos will induce motion sickness.

Unlike the 3D processing, which is applied to whole movies, stabilisation can be added selectively. During production and reviewing, just click and the effect will be added to a section of the movie timeline. It's not as good as holding the camera steady while filming, but it does work, making motion sickness-inducing movies watchable.

As you can imagine, much of this post-camera work is very processor intensive. We tested the software on a PC with a Phenom II Black X4 and 4GB of RAM. Transforming a brief, standard- definition home movie from 2D into 3D cranked all four cores to the maximum occupancy, and kept them there for a long time.

Happily, Creator 2011 supports ATI Stream and CUDA, so in these moments of demand your graphics card – should it support the standards – can pitch in and help with the maths. This feature was present in Creator 2010, but it's been refined and improved for the new version.

The other great improvement over the 2010 edition is the ability to transform your PC into a media server for access via the internet. The software makes the daunting process straightforward.

Elsewhere, things are smaller. For instance, Roxio's Easy Video Copy and Convert utility has been improved. The idea is simple: select your source movie file, choose the device you'd like to play it on and leave the thorny business of converting between the two to the software. A long list of source formats is supported, including all the usual suspects – Xvid, IFO/ VOB, AVC (H.264) and AVHD.

Destinations range from simple DVD discs through to Apple's portable devices, PSP, Xbox, PlayStation 3 and even the Zune. Again, the process can be accelerated with a little CUDA.

All this leaves just one question unanswered: should you buy Creator 2011? If you own the 2010 incarnation, we'd say no. There's just not enough here to merit an upgrade from a piece of software that's still eminently capable.

However, if your digital media library is booming and your collection of electronic players is growing, it's worth picking up. The ease with which the software makes any content watchable on any device is worth the money, and excellent help systems and swift sharing via Facebook and YouTube are the cherries on the cake.

For the 2012 edition we'd ask for just one thing: that Roxio makes Creator's constituent applications load more quickly. Even on a nippy PC, they feel somewhat lethargic when working their magic.