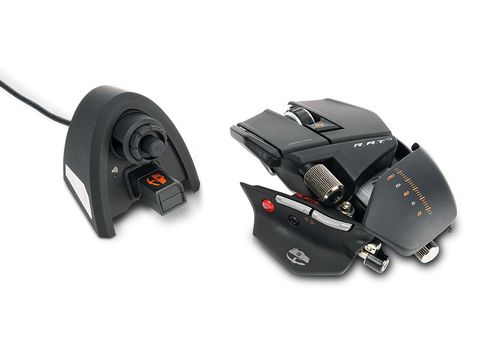 This is the wireless version of the rather good R.A.T. 7 gaming mouse

Strangely it seems like aeons ago since we first laid our hands on the MadCatz Cyborg R.A.T. 7, a mouse so weird-looking Zaphod Beeblebrox would get it free with his breakfast cereal. But bizarre as it no doubt looks, it's one of the finest gaming mice I've ever laid my cramped-up claws on.

The R.A.T. 7's accurate, responsive, solidly-built, fully adjustable and incredibly comfortable to use. In fact if it wasn't for the £70 price-tag I would urge everyone to go and pick one up with their Christmas money.

What we have here then is the Cyborg R.A.T. 9, the wireless equivalent of the R.A.T. 7 in every conceivable way.

The only thing you're missing out on is the material-covered cable tail stretching out of its front. This is instead replaced by a 2.4GHz wireless connection, boasting a fairly minuscule 1ms response time. Now, I'm no pro-gamer, which my Black Ops scores unhappily attest to, but that's a decent reaction time that could maybe convince some to step away from their wired up rodents.

Realistically then this is a home gamer's device, and a home gamer with a fair bit of disposable income to play with. As the R.A.T. 9 sits somewhere around the £120 mark it represents a fairly hefty chunk of investment.

When I checked out Razer's competing wireless Mamba gaming mouse, another 5,600dpi beast, I almost spat out my coffee all over my keyboard at the touted £120 pricing. Strangely, I'm less stunned at the cost of the R.A.T. 9, but equally I'm finding it tough to find anything here that warrants my recommending this product as a worthwhile controller.

There's no new innovation here; no plug and play mechanic, which both the wireless Mamba and Microsoft's Sidewinder X8 use to good effect. So you're stuck with a dual battery setup and having to switch batteries when power levels go south.

The wired version is pricey enough and you really don't get enough on top of that version to justify the extra £50 price premium MadCatz is putting on this wireless mouse.