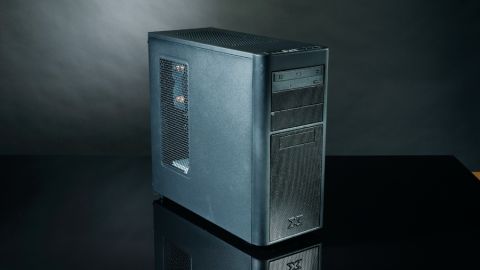 The Wired2Fire Diablo GTX machine looks to be hitting a similar spec to the excellent PC Specialist Vanquish Eclipse 670 MKII though with half as much RAM and a much quicker SSD.

To be perfectly honest, dropping the RAM count down won't make a blind bit of difference to your experience with this rig unless you're the sort of person who spends a lot of time tweaking massive image files in Photoshop. Even then, 8GB is a pretty sizeable chunk of RAM to be playing with. In terms of gaming the difference is negligible to the point of being inconsequential.

The SSD though is a different matter. The Mushkin Chronos Enhanced drive seems to be one speedy ol' solid state drive, especially in terms of the 4K random writes, which are almost twice as quick as the Intel 330's in the PC Specialist rig.

In sequential read/write terms though it's not quite so quick. Those 4K scores though should give you a good idea of just how responsive your PC would be in general terms, and that would offset any perceivable issues caused by dropping the RAM capacity.

With the smart choice of using the GTX 670 as graphics card the Diablo GTX has got some impressive gaming chops, and will throw polygons around a 1080p panel with aplomb. Compared with the excellent overclocked HD 7970 of the AdvanceTec rig though it's still looking like a bit of a slouch - but aside from the heavily compute-focused DiRT Showdown you'd be hard pushed to see the extra performance when you're actually in-game.

Wired2Fire doesn't have a bad standard warranty. The Vibox and YOYOTech offerings of just a single year of parts and labour cover are the weakest, with Scan's three-year cover being the best. Wired2Fire offers a two-year return-to-base warranty, with cover for both parts and labour for the full term. That's almost up there with the Chillblast cover. That gives great peace of mind when you're choosing your components, and means that your overclocked machine will still be going a couple years down the line.

You will have to sort out getting the rig back to the manufacturer if something goes wrong, but that's a small price to pay if it's something serious.

That might come in handy, because the rig has been set up so that the i5 is running at a constant 4.6GHz rather than throttling up only when needed. The large cooler should stop that becoming a problem, but it still seems odd not to take advantage of the power saving functions of the Intel architecture.

Again though, it's a very well balanced setup, marrying impressive gaming speed with decent raw processing chops and a general computing setup that will give you a very responsive experience.

It's also a machine that will last you a long time, giving you a decent length of time before you're going to need to start realistically thinking about which parts you upgrade.