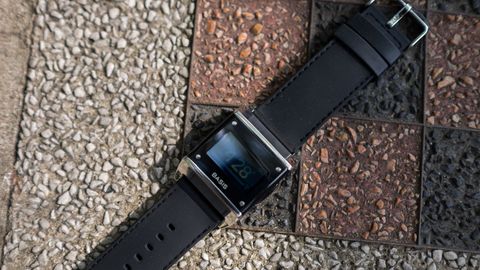 It has the brains, but does it have the looks?

Bigger and brainier than your average activity tracker, the Basis can track everything from your heart rate to how well you're sleeping.

Let's face it, fitness trackers are still awfully limited in their ability to keep track of what's going on with your body. We're just only starting to see a few devices with extra biosensors such as the wrist-mounted heart rate monitor on the Samsung Gear Live and sleep tracking functionality of the Jawbone Up24.

Now, Basis promises its smartwatch is the world most advanced health tracker. The activity band is outfitted with a three-axis accelerometer, optical blood flow tracker, perspiration monitor and yet another sensor to check skin temperature.

All of these extra sensors and added data tracking makes the Basis Smartwatch one of the brainiest wearables on the market. The device can even tell whether you're wearing it, whereas the Fitbit would just call you lazy. Now the question is can Basis really deliver on all this in-depth activity tracking and be accurate, or are these simply empty promises?

At a glance, the Basis looks more like a watch than other activity trackers, like the Nike FuelBand SE or Jawbone Up24. The device resembles a retro digital watch from the 1980s, down to it black-and-white display. This monochromatic screen adds a bit of nostalgic personality to the smartwatch, but it's a teeny-tiny 0.62 x 1 inch slit. It pales in comparison to the gorgeous screens seen on new Android Wear devices such as the Samsung Gear Live or LG G Watch. Still, the display is bigger compared to the Fitbit Force's 0.75 x 0.375 inch screen or Jawbone Up24's total lack of a visual interface.

The Basis Carbon Steel fitness tracker in this review is newer, classier and thinner than the original B1 model, though it still measures a noticeable 0.68 inches in depth. A few other new bells and whistles include a stainless steel steel clasp and leather band. These extra bits of style make the watch look a little bit more modern compared to the older, all-plastic variant. Still, if you're not satisfied with the default band, the Carbon Steel's strap can be swapped out, just like it can on the B1 version. It just looks more permanently connected to the module this time around.

Turn the watch over and you'll see the back of the Basis is covered with six metal contacts. In the center there is also another of sensor which at first glance appears to be a microchip. But in reality this cluster in the middle of the watch is actually a optical sensor sided by a pair of miniature green LEDs. When users wear the watch these LEDs pulse light through the wearer's skin down to the capillaries to track how fast their blood is flowing.

Despite having all these metal contacts prod your wrist, it's completely comfortable to wear the Basis all day thanks to the soft, pliable wristband. The Basis is considerably weightier than your average fitness band at 44 grams. The Jawbone Up24 by comparison taps in at a scant 20 grams while the Fitbit Force sits in the middle at 30 grams.

Like the Nike FuelBand SE, newcomers to Basis will have to set up an account before beginning to use the wearable. This includes connecting the device to a PC or Mac, and downloading the latest firmware. After entering a few details including your weight and height, the watch will restart and you're away. Syncing thereafter can be done by plugging in the smartwatch to a computer again or setting it up to automatically push sync data to a smartphone over Bluetooth.

While Basis smartwatch tracks plenty data points, users will only be able to see a few bits of information on the wearable itself. The wristwatches' dimmed, but always-on screen, shows you the time, indicators for whether Bluetooth is turned on and remaining battery life. Below the clock there's also a small runner icon speeding towards your goals for the day.

Tapping on the two capacitive touch pins on the right of the wrist watch's screen will scroll through your heart rate, steps taken and calories burned. Users can also check how long they've been walking, running or biking for that day plus the number of calories they've burned whilst moving about.

Otherwise, there's not much else to the Basis. The other two front facing buttons turn on the screen's backlight, letting you checking the time in the dark, and another to bring up the date and day. Sadly the Basis lacks a stopwatch, alarm, timer or any other basic functions you'd expect from a watch.