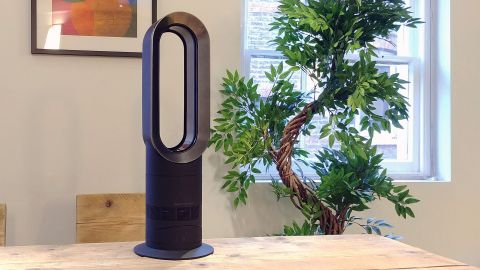 A fantastic-looking fan heater, the Dyson Hot + Cool AM09 is a versatile, simple-to-use and attractive addition to any home (or at least those that can afford it).

A fan heater and cooling solution in one, equally comfortable cooling or heating whichever room you put it in? That's what the Dyson AM09 Hot + Cool fan heater sets out to be, and succeeds in being.

Some smart upgrades over early models make the AM09 the best revision of the line series so far (smart, connected variants notwithstanding), but it's going to cost you.

Dyson’s fan line has impressed us ever since it first entered homes, safely removing the dangerous blades of traditional fans in favor of Dyson’s smart bladeless air multiplier technology. Does the AM09 fit the trend? Let's take a look.

The Dyson AM09 Hot + Cool fan heater is one of our favorite home heaters. But now it's  ageing a little, there's a good chance it'll be reduced in the upcoming Black Friday 2019 sales, which start officially on November 29.

However, many major retailers, including Amazon and Currys in the UK, are kicking off their big discounts early – and they're sure to include a lot of smart home deals. So keep your eyes peeled on TechRadar for the latest deals.

It’s not easy to make a device as utilitarian as a fan look exciting, but the Dyson AM09 pulls it off. The fan is available in black and white shades, but we opted for the black model which wouldn’t look out of place in Darth Vader’s office on the Death Star – which is high praise indeed, unless you’re Obi-Wan Kenobi.

The most striking thing about the design of the Dyson Hot + Cool AM09 is its bladeless cavity. Making up close to two-thirds of the footprint of the device, It’s through this loop that the warm or cool air is propelled, using Dyson’s air multiplier technology to draw air in, and throw it back out at a cooling speed, or through its heater.

While aesthetically looking super cool, it’s also much safer than the spinning blades of a traditional fan, and even when blasting out higher temperatures never becomes so hot as to be uncomfortable to touch. It’ll also automatically turn itself off if for whatever reason it gets knocked over, making it relatively baby-safe.

The rest of the cylindrical shape is is taken up by the tilting, optionally-automatically-rotating base, which includes the air vents, a single power button and a small LED display which lets you know which mode, speed and temperature the fan is set to.

Standing about 60cm tall, it’s just about compact enough to be considered a viable desk fan, though we felt it was better suited to standing on the floor, slipping nicely into the corner of a room. With its chrome accents and neat industrial design (little touches like the magnetic resting spot along the top for the remote ooze premium quality), the AM09 has that rarefied distinction of being interesting to look at, and yet not an overbearing distraction in a room. It’ll slip right into basically any decor, but it does have a tendency to attract dust and (on the black model at least) smudgy marks. Thankfully, it wipes clean with a damp cloth, so any blemishes are unlikely to be permanent.

You want to get hot, or stay cool? As a two-in one device, the AM09 has you covered whether it’s the deepest darkest nights of winter, or a sweltering summer’s day. As a fan heater, it can pump out either fast blasts of cooling air, or warm cosy waves.

Flipping between the two modes is as simple as a push of a button on the Hot + Cold’s remote, with a foolproof red or blue color coding letting to switch between heat options. The remote also controls the intensity of the air pumped through (in ten distinct levels), oscillation options, a sleep timer (in increments up to 9 hours) and the precise temperature you’re looking to hit, as illustrated by the base unit’s LED display.

Note though that, with only a power button on the fan itself, you’re going to be unable to access these controls if the remote goes missing – making that magnetic area at the top previously mentioned all the more important. The remote is about three inches long, and is handy for making quick adjustments from the other side of a room (and was particularly useful when tucked up in freshly-warmed bed), but could easily find itself lost in the depths of a sofa.

The Hot + Cool AM09 can be set to pump air out at any temperature from 0 to 37°C. What’s particularly smart is that it’ll intelligently adjust its output based on the ambient temperature of the room – the temperature you set is what it’s aiming to reach and maintain in the environment around it, rather than a measurement of what it’ll be constantly pushing out. So you don’t have to worry about a room getting overly hot or cold if it’s left to its own devices for too long. Cleverly, Dyson has engineered the heating components to never rise above a maximum of 200°C – that’s the burning point of dust, preventing that unpleasant smell from arising when dust starts to collect in the unit.

Two more buttons on the bottom of the remote offer the last pieces of the Hot + Cool puzzle – the width of the air stream. You can choose between a wide dispersal mode, or a new “Jet Focus” option which sends a directed blast in a narrow cone. This is great for the lone user – whether pointed at your chilly toes under a desk in November, or at your sweaty post-run face in June, you can quickly get a comforting blast to fix your mood.

As for how noisy the fan is, that depends on the speed level you’ve got the fan set to. At its top levels, it is indeed notably loud, constantly humming. For better or worse however, it does fade into the background after a little as it’s a constant presence – it’s only when you switch it back off that you notice quite how present it has been. As you’d imagine, the intensity of that feeling is directly proportional to the level of the fan, so if you’re happy to have it running at lower level, it’ll be more palatable. And, in its defence, it’s a much more agreeable sound than you’d get from a bladed fan.

The Dyson Hot + Cool AM09 fan heater is a great-looking, hard-working fan that will slip comfortably into many decors, quickly getting a room’s temperature to that ‘just right’ Goldilocks temperature. But those looks and abilities come out a high price – it’s a great fan, but it’s among the more expensive you’ll be able to kit your home out with. As the old adage goes, you get what you pay for.