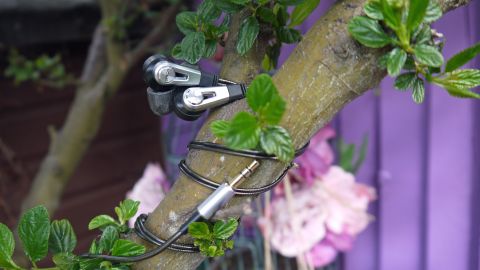 Denon's C821s both look and sound great. With their decent design and impressive driver technology they are full of premium promise at a price that’s just about affordable.

With so much onus on over-the-ear headphones these days, thanks to Beats and other ‘look at me’ brands, it’s nice to see an audio company still try and push the limits of what can be done in the (nearly) affordable in-ear 'phone market.

Denon has packed some impressive technology in its Denon AH-C821 range. They’re using the company’s own Double Air Compression Driver tech, which means there are two 11.5mm drivers in each earphone - one in front of the other.

The idea is that this offers up a more powerful bass sound than a single driver unit. If that wasn't all, these drivers have been encased in some super-tough housing, made out of die-cast aluminium and resin - so vibrations should be kept to a minimum.

All of this should equate to a cleaner, deeper sound and it is certainly noticeable… to a point.

Thankfully, dual drivers don’t make for bulky earphones. A small circular casing holds the the Denon C821’s drivers, this is followed by the earbud section.

There’s a nice selection of silicone earphones in the box, so no matter the size of your ear canal you should find a size that fits.

There’s also a pair of Comply tips - these use expandable foam that make for a snugger fit. They’re not for everyone but if you want a decent seal, then these are the ones to go for.

The circular back on the C821s fitted nicely against our ear, which was a surprise as the design made us think that these would stick out, but they are refreshingly flush to your face when on.

Even wearing them for long periods we didn’t notice any pinching or pain, although they did threaten to jump out of our ears once or twice.

A v-shaped shaft extends down from the earphones on to the cable. The cable isn’t detachable but it is thick which means it’s mostly free from tangles, even when you put the C821s in your pocket.

Denon has added some extra dampening to make sure the sound of the cable doesn’t impede your listening. But if you want to go one step further there is a supplied cable clip - so you can attach the cable to your clothing to stop it swinging around.

At the end of the cable is a vertical 3.5mm jack. For us, having a ‘straight’ jack did mean it slipped out of our phone's slot on more than one occasion - this wasn't a deal breaker but it did remind us of the merits of having Bluetooth compatible headphones to cabled ones.

Looks-wise, then, the Denon C821s are decent, but this doesn’t mean anything if the sound coming out of them is below par. Thanks to the dual drivers, we really like what we heard.

The drivers are all about the low end, so what better track to test them than Four Tet’s remix of Todd Terje’s Jungelknugen.

Once the drop happens and the bass kicks in around the 2:10 mark, the track came to life through the C821s, offering a powerful sound that didn’t negate the mid levels too much.

Although the sound occasionally sounded a little murky on the whole each new beat was clear and not fighting the other sounds for attention.

Thundercat’s A Fan’s Mail is a somewhat woozier track, where sounds cascade and blend throughout.

When listened to on a sub par pair of headphones, the whole song can sound sludgy but, again,  Denon’s earphones picked up the nuances nicely, allowing the hazy music to drift as it should.

Where the C821s did falter was when a song is middling in sound - not too bassy, not too high pitched. Although it handled most of Goldfrapp’s latest album, Silver Eye, well, the Denons struggled a little to breath life into Faux Suede Drifter.

The song may meander but it sounded flatter through the C821s than we would have liked. Denon does offer up a solution to getting the most out of its headphones, though, and that’s its own Denon Audio app.

Download it for both Android and iOS and it will overlay on to your music and allow you to change the EQ levels to your liking.

There are a number of caveats, though. The app is there as a replacement to the stock music player on your phone, as it can only be used for downloaded songs - it won't work over the likes of Spotify. Saying that, the ability to change the EQ levels mid song is impressive and the UI is clean enough to replace your existing player.

You do also get TuneIn, which is a bonus if you want to listen to internet radio on your phone and have a bit more control over how your downloaded music sounds.

As we're all about streaming now, however, the app felt a little redundant to us.

The Denon C821 are a decent-looking, well-made set of in-ear headphones. The tech inside them, as well as the packaging they come in, screams premium but the the price is reasonable when you consider what you are getting for the money.

While $165 (£129 / AU$220) (at time of review) will be at the wrong end of affordable for some, you’re getting headphones that offer sound that’s well worth the price.