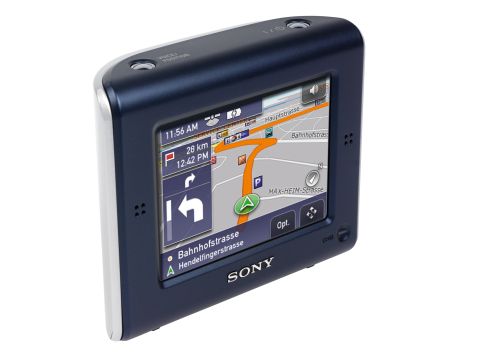 Weighing 280g, it's not the most portable of devices, but it is stylish and well made

Sony may not be the first name you think of when it comes to satellite navigation, but its NV-U51G (£199 inc. VAT) is a legitimate rival to the likes of TomTom.

It has maps of the UK and the Republic of Ireland pre-installed on 512MB of flash memory, although with no card reader, you won't be able to upgrade this in the future. Weighing 280g, it's not the most portable of devices, but it is stylish and well made.

A 3.5-inch touchscreen display covers the front of the unit. It's crisp, and displays smooth images that are easy to see in all conditions. In daylight it's bright and colourful. A sensor on the side of the device adjusts the display at night.

Functions are carried out using onscreen buttons. They're just about large enough for everyday use, although the option of a stylus would have been nice. We also found the menu a little tricky to navigate at first, with no clear indication of what every button does.

Destinations can be entered using full postcodes or street names, and there's also a comprehensive points of interest (POI) list you can choose from. As with most other devices, it's possible to view maps in either a 2D or 3D perspective.

Sony has taken this a step further by highlighting POI with detailed 3D images. With renderings of Buckingham Palace and Big Ben, among others, and logos for major garages and restaurants, it's the most aesthetically pleasing sat-nav system we've seen.

A 'draw and go' feature allows you to plot your destination by tapping it on the map. The NV-U51G also saves a list of recently visited destinations, giving you a variety of simple ways in which to input an address. We found the Sony quick to locate satellites, thanks to a SiRF Star III GPS module, and it rarely lost its signal. On the move, we found it an excellent device, giving clear instructions in plenty of time.

Verbal instructions are also clear and concise, and adjusting the volume is a simple process - something that isn't always the case on rivals. However, even with the speech muted, the buttons still make a loud noise when pressed.

The biggest problem we had was with the cradle. Although the rubber suction pad provides an adequate hold, attaching it is made difficult and time-consuming due to various adjustable knobs that get in the way. Once attached, however, it holds the Sony firmly in place.

In all, there's a lot to like about the NV- U51G. Once you've mastered the interface, it's quick and easy to use, and directions are accurate. If European mapping is not a requirement, it's also well-priced.