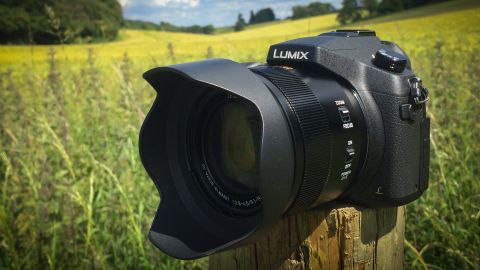 Recommended
It looks like an SLR, but that 25-400mm (equivalent) lens is fixed

Although it's large for a bridge camera the FZ1000 has lots going for it including a versatile focal length range, a 1-inch sensor, raw and JPEG image recording and the ability to produce high quality images in many situations.

Thanks in no small part to their lens zoom range, bridge cameras are still a buoyant section of the fixed lens camera market. In fact, according to Panasonic's research the most important feature for prospective bridge camera buyers is their lens zoom ratio, followed by the lens quality and then image quality.

Consequently, Panasonic has given the FZ1000, its top-end bridge camera, a 16x zoom range with a focal length equivalent to 25-400mm. What's more, this is a Leica DC Vario-Elmarit lens with a maximum aperture of f/2.8 at the widest point and f/4 at the narrowest.

As well as allowing the shutter speed to be kept at safe hand-holdable levels in low light, having a large maximum aperture gives the photographer the ability to restrict depth of field and separate the subject from the background when they want to.

To ensure better image quality than the average bridge camera, the FZ1000 has a 1-inch sensor (significantly larger than the 1/2.3-inch devices in most models), with 20.1 million pixels. The larger size sensor means that the photo receptors (pixels) are larger and this should have a positive impact upon noise control, dynamic range and image quality as a whole.

Panasonic has coupled the FZ1000's sensor with a new Venus Engine which the manufacturer claims will dramatically improve the resolution, gradation, colour reproduction and noise control compared to Panasonic's existing bridge cameras.

Naturally, being Panasonic's top-end bridge camera, the FZ1000 has exposure modes to suit enthusiasts (program, aperture priority, shutter priority and manual) along with Intelligent Auto and scene modes to help less experienced photographers. There's also the Creative Control option which allows users to select one of 22 filter effects to use. These effects are applied to JPEG files, but they can be used when shooting raw files simultaneously so that there's a clean file available for processing.

In a first for a compact or bridge camera, the FZ1000 is capable of recording 4K (3840 x 2160 pixel) video footage at up to 25fps (PAL) in MP4 format. This comes with the advantage of being able to output 8Mp still images for a better viewing experience on 4K televisions.

Naturally, it's also possible to record video at Full HD and VGA resolution. The FZ1000 can record in MP4 and AVCHD to allow easy transfer, editing and sharing of movies. Those interested in slow motion playback will appreciate the ability to record Full HD footage at 100fps.

We first saw the company's Depth from Defocus technology in the Panasonic GH4, Panasonic's flagship compact system camera. It has been used again in the FZ1000 to achieve focus speeds that are said to be 275% faster than those achieved by the Panasonic FZ200. Panasonic claims a focus speed of 0.09 second at the widest point of the lens and 0.17 second at the telephoto end when the viewfinder is used to compose images.

There are a total of 49 AF points available for selection either by the photographer or automatically by the camera. In addition to 49-Area and 1-Area AF, there's also the Custom Multi AF mode, first seen in the GH4. This allows the user to select blocks, rows or columns of AF points for use.

Panasonic has also added Pinpoint AF, in which the camera automatically magnifies the focus area to ensure the correct section is in focus, and Focus Peaking to show the areas of highest contrast (focus) around the focus position in manual focus (MF) and AF+MF modes.

In addition to Face Detection AF, Eye Detection AF mode is available to automatically set the focus directly on a human eye, and it can start focusing as soon as the viewfinder is used.

Being a bridge camera, the FZ1000 has an electronic viewfinder. This is a 2,359,000-dot OLED device. There's also a 3-inch 921,000-dot LCD screen mounted on a vari-angle hinge to allow the monitor to be seen from a wide range of angles. One surprise with this screen, however, is that it is not touch-sensitive.

Like Panasonic's recent compact system cameras, the FZ1000 has Wi-Fi connectivity built-in and an NFC chip to allow a connection to be made quickly to an NFC enabled smartphone or tablet. As well as wireless image transfer, this means the camera can be controlled remotely via Panasonic's Image App.

Other features brought with the FZ1000 include zebra displays to indicate the brightest areas of a scene, timelapse shooting and stop-motion recording.

Given that it has a larger sensor than Panasonic's other recent bridge cameras, it's not a surprise that the FZ1000 is also a little larger bodied. In fact it's a little bigger than the Sony RX10, but then it does have a much longer lens (albeit with a smaller maximum aperture at focal lengths above 25mm).

The camera feels well built and solid enough in the hand, without being too heavy, but it's a little more plastic-feeling than the RX10.

Like other bridge cameras, the new camera has SLR-like styling with a chunky finger-grip and a liberal helping of dials and buttons giving a direct route to key features.

On the top of the camera there's a mode dial to set the camera to shoot in aperture priority, shutter priority or manual exposure mode, or one of the automatic modes, such as Panasonic's Intelligent Auto (iA) mode, designed to help novice photographers.

Although there is a deep zoom ring around the lens barrel, using it to zoom from 25 to 400mm feels quite laborious, so I prefer to use the switch around the shutter release to make major adjustments and the ring for minor tweaks to the framing.

A switch on the side of the lens allows the ring to be changed to control manual focusing. The reliability of the FZ1000's autofocus system is such that this isn't required very often, but it can come in handy with some close subjects and the Focus Peaking display helps to make it clear when the subject is sharp.

With 2,359,000 dots at its disposal, the OLED electronic viewfinder (EVF) gives a good, clear view and changes made to the exposure or colour settings are quickly reflected in the image it displays. The 921,000-dot LCD also gives a clear, detailed view and its articulating joint means it is useful for composing images at above or below head-height.

It's disappointing that the screen is not touch-sensitive though as this would allow speedier selection of AF point and more convenient shutter tripping in some instances.

The EVF and rear screen are both capable of showing an electronic level so you can be sure that the horizon is at the correct angle. This is easy to see in the viewfinder, but it can be tricky to see the thin yellow line (which turns green when the camera is level) on the screen in very bright conditions or when the viewing it from an angle.

A switch around the AF/AE Lock button to the left of the thumb-rest on the back of the camera allows the focusing to be changed quickly between single AF, continuous AF and manual. The left button on the navigation control is also a shortcut to the AF mode options. In 1-Area AF mode the AF point is selected by hitting the left navigation button and then hitting the down key, before using the navigation controls to activate the desired point. It's not terribly slick and takes longer than tapping a screen or having a dedicated control.

There's a 'Direct Focus Area' option in the custom menu which turns the navigation pad into a dedicated AF point control, but it has the downside of deactivating the shortcuts (ISO, white balance and macro mode). Thankfully, these options can be assigned to the Quick Menu.

The drive mode dial on the left of the top-plate allows the camera to be switched to continuous shooting, auto exposure bracketing, self-timer or timelapse mode. I found it especially useful when I chance upon a moving subject as I quickly set the camera to continuous drive and continuous AF mode (the latter by the rear switch mentioned earlier).

The FZ1000's menu is logically arranged and will be familiar to users of other Panasonic cameras. Those who are new to Panasonic cameras may like to activate the Menu Guide, although the level of assistance that this offers is variable. When Metering Mode is selected, for instance, it explains that this is to 'select the brightness measurement mode' and each of the options (Multi, Centreweighted and Spot) have similarly helpful explanations when highlighted. When attempting to choose between using the electronic or mechanical shutter it doesn't explain why you might opt for one or another (maximum shutter speed rises to 1/16000sec with the electronic shutter) it merely tells you which option will be selected by each setting.

Another issue is that the HDR (high dynamic range) option is JPEG only, as it is with many cameras. Canon seems to be the only manufacturer that allows raw files to be recorded at the same time as JPEG images when shooting an HDR sequence, and even then it is only made possible on the Canon 5D Mark III. However, there's additional frustration with the FZ1000 as the camera won't automatically turn off raw recording (with a warning) when HDR mode is selected, instead the photographer has to turn it off before HDR mode can be activated.

Although I've raised a few negative points about the FZ1000, it handles well, is responsive and has generally sensibly arranged controls.