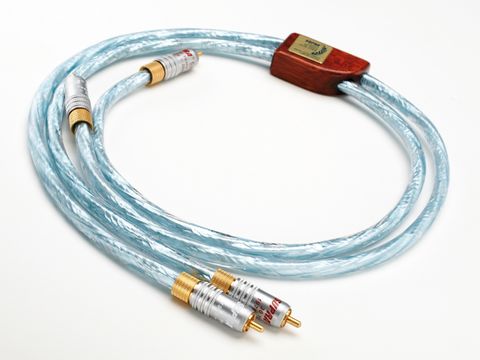 The first 3,000 pairs of this cable will be supplied in a 30th anniversary presentation case

Supra Sword-ISL is designed as the natural partner for the Sword speaker cable. Described as a 'global limited edition', the first 3,000 pairs of the cable will be supplied in a 30th anniversary presentation case. After this, the single-ended 'ISL' and 'IXLR' balanced versions will be made available in standard packaging. The cable will, of course, remain entirely unchanged.

It draws on the same broad design parameters, and is billed as inductance free, thanks to its proprietary construction. Supra is one of the few cable makers that extrudes, insulates and winds its own cable, rather than simply terminating off the reel.

The non-inductive nature of the cable arises because half the 12 individually insulated conductors are wound clockwise, the other half anticlockwise, so there is no net magnetic field, and virtually no phase distortion.

In some ways, the interconnect is an improvement on the speaker cable: there is no detachable termination, and the plug produces a tight friction fit with the sockets when the plug collar is rotated. The wooden boss acts as a spacer for the two conductors and also indicates the direction of signal flow.

On audition, this is a very striking cable, in the best sense. It is bold, architectural and outgoing, with unsuppressed dynamics when the music gets going, but spaces between notes have an inky blackness that more than hints that the musical energy is going just where it was intended, with no bloat or overhang.

Detail is also abundant, but it is produced quite naturally, with wholly believable orchestral string tone and vocal quality, and, perhaps best of all, a suitably percussive piano reproduction.

Add to this the apparently all but indestructible nature of the cable, which looks unlikely to give up the ghost as many cables do under long term reviewing conditions, and pricing looks more than fair.