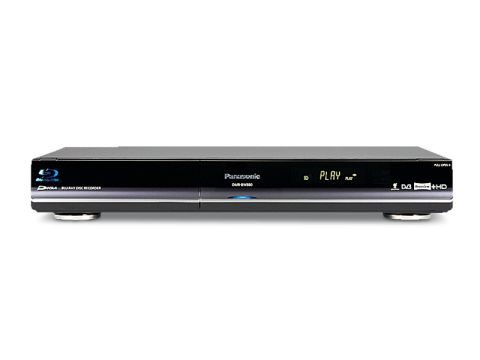 The BW880 has two Scart sockets, but we can't think why you'd want to use them

Steve Jobs may have dismissed Blu-ray, but when it comes to watching and archiving HD movies, IP delivery and hard-disk storage have some way to go before they can match the convenience and efficiency of optical media.

And for the significant, but niche, group of enthusiasts who like to archive either TV broadcasts or their own digital home video recordings, a Blu-ray/PVR combi is the ultimate living room recorder, especially when it has dual Freeview HD tuners.

A couple of years ago, Panasonic bestowed a brace of Blu-ray recorders on the world with its Freesat models, so it was no surprise when the 500GB DMR-BW880 and 320GB DMR-BW780 recently rode in to town on the coat tails of Freeview HD.

When Freesat launched it was hampered by copy restrictions that prevented ITV HD shows from being archived. Happily, this situation is not an encumbrance to Freeview, as present rules allow BBC HD broadcasts to be copied on to Blu-ray multiple times, while those from ITV and C4 may be copied once (and you can make further limitless standard-definition copies).

Considering how cutting-edge the DMR-BW880 is under the hood the box itself looks somewhat bland. The fascia is split into two dropdown panels; one hides the optical disc drive, the other, through which the LED display shines, reveals some basic transport control buttons, composite video/stereo phonos and inputs for DV, SD card and USB.

With Top Up TV now offering Sky Sports, the absence of a CI slot could prove critical for sports fans. The front edge of the otherwise nondescript top is festooned with 14 barely visible badges such as AVCHD, GuidePlus+ and DTS-HD MA, with the Freeview+ HD, DVB and Gracenote logos getting full prominence on the front right panel.

The latter has significance for anyone likely to use the BW880 as a music server; the hard disk can store 40,000 tracks and has a folder structure similar to an MP3 player with artist, album, playlist, favourite and random options.

Despite charging a princely sum for the BW880, Panasonic doesn't provide any built-in flash memory, and to enjoy BD-Live you need to supply your own 1GB SD card.

The company did at least find room for both optical and coaxial digital audio outputs. All common video formats can be output, with the exception of component video. Up and running It takes some time to get to grips with the BW880.

If, like me, you take the plug 'n' play approach before reading the 120-page instruction manual, you'll be pleased to know that the machine tunes itself in and asks you to set basic preferences such as power saving settings.

Within minutes, I was watching BBC 1 and instinctively pressed the okay button on the remote to access the channel list. No programme info is provided here but scrolling up and down and selecting a channel is reassuringly fast.

Considering Panasonic's deck is such a complex beast, both the menu system and remote control are well laid out, and the latter deserves special praise. It's a nice size, has good ergonomics and colour coding, not to mention the fact that all the vital functions are easily and logically accessed.

One key button allows you to switch between the HDD, BD, USB and SD drives. For the most part Panasonic's user interface works very well, but, like the box itself, it looks dated and not nearly as slick as those used by the likes of LG and Samsung.

Even more offensive, though, is the GuidePlus+ sponsored Freeview EPG, which carries poster adverts that even Gene Hunt would find archaic. Advertising has its place, but the EPG page isn't one of them.

Another annoyance about the EPG is that you entirely loose the picture and sound of the current broadcast. The EPG shows seven channels in two-hour segments and you can switch between list and grid view. You can filter by genre, but not according to definition type (HD or SD), and you can directly view the channel or set a recording timer, including series link.

The EPG does tell you if a show in standard definition is also available in HD, and you can pad out recordings manually or change the title. Banner info when watching a live TV broadcast shows Now and Next descriptions, whether it's HD or not, as well as what the audio format is and what else is being recorded at that time.

All TV shows are recorded in DR (direct record) mode using the same bitrate (8Mbps for HD, 4Mbps for SD) as the original, to the hard disk. The 500GB HDD has a handy 130-hour HD capacity.

The HD Freeview tuner is first rate. The BBC Make Up Department should take note: the orange line across Gary Lineker's forehead has never seemed so obvious!

Image clarity and detail are a match for Sky HD and any other Freeview HD tuners. Standard-def pictures are also excellent, especially if you set the output to 1080p and partner the box with a decent screen.

One caveat is that detail drops-off just a tiny bit with recordings, presumably as a result of re-encoding. On all but the largest of screens it will be barely noticeable, but certainly on a Samsung UE46C8000 I noticed skin tones appeared blotchier. Fortunately, no more detail is lost when recordings are copied on to Blu-ray.

Audio clarity is also very good, but the BW880 doesn't output Dolby Digital surround sound. This is because broadcasters use the AAC codec, in order to ensure provision of Audio Description, and the box can't transcode from AAC to DD (few units can, in fact).

When spinning Blu-rays, though, the likes of Dolby Digital Plus, Dolby TrueHD, and DTS-HD MA can all be bitstreamed via the HDMI output. The Direct Navigator button on the remote is the gateway to recordings, which are displayed with a thumbnail. You can view shows by genre, as well as those not viewed and AVCHD files archived from your camcorder.

In all modes unviewed shows are flagged up and icons tell you how many Blu-ray copies can be made of HD ITV and C4 programmes. To copy archived material to Blu-ray you might want to convert from DR to HG, a process which is done in real time, but can be done when the machine is in standby. While this lowers the bitrate by around 50 per cent, it's still considered HD.

The reason to do this? Because nowhere in the manual or onscreen does it tell you that if you wish to play a finalised Blu-ray recording in another brand's player you have to convert from DR mode.

A number of useful editing options are available such as chapter marking, splitting, changing the thumbnail and renaming. Blank disc formatting can't be done if the hard disk is recording a show, but after that it's fairly straightforward to select titles for copying, as the Panny walks you through the process of selecting the copy mode and direction and which shows you want.

Despite some rather sluggish disc-loading times, the DMR-BW880 is a very decent Blu-ray deck. The incredible Avatar disc looks clean and pure, as the deck renders plenty of fine detail in Sully's T-shirt and in the bristle of his beard.

Multimedia playback is not as broad as some machines and it oddly refused to show my reference JPEG snaps, but MP3 and DivX HD played back without any problem.

Clearly, the DMR-BW880 won't be everyone's cup of tea, and it bears a price tag commensurate with its early adopter status. But if Blu-ray archive recording from Freeview HD is your bag, this is a highly accomplished machine that comfortably delivers the goods – plus a few others besides.