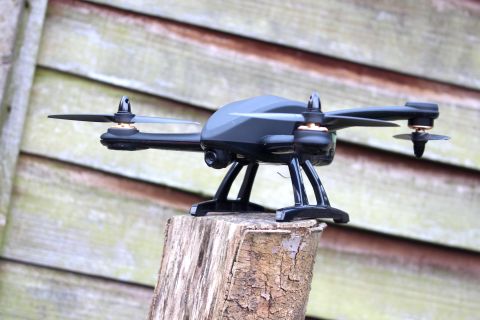 With its dedicated remote and video monitor the low-cost DaVinci is ideal for novice drone flyers who fancy taking to the skies and capturing photos and video to share on social media, but average battery life and mediocre image quality count against it.

Low-cost drones are normally all about compromise – you either have to make do with reduced features, or you need additional hardware (such as a smartphone for control) or, in the worst possible cases, both.

The Aerix DaVinci is unique in that it aims to offer everything you need to start your drone-piloting career 'out of the box' (although that's not entirely the case as you'll need to shell out for a microSD card for photos and video capture) all for less than £250 / $300 / $AU400.

At around 245mm by 245mm, the Aerix DaVinci has all the hallmarks of a low-cost drone you'd expect to fly around your living room but not dare take outside. However, this little marvel is capable of some daring escapes and impressive performance, which we'll get to later.

The main body is plastic with a matte-like finish, while the underside is glossy plastic. The two landing arms (or should that be legs?) are also glossy plastic, and these can be detached when the drone is not in use.

The 1200mAh battery clips to the underside of the unit, and can be released quickly without any fuss or the removal of screws. The brushless propellers – two standard and two inverted – are mounted on surprisingly sturdy-feeling arms, while the front of the unit is home to a 1920 x 1080-resolution camera which can be manually adjusted on a vertical axis.

On the back there's an LED light strip which, when things are going well, is green. When it turns red it means the battery needs charging, or the connection between the drone and the remote has been lost.

Our only real grumble design-wise is that the microSD card slot, which is located between the camera and the battery, is totally exposed, and should you experience a crash or heavy landing there's a good chance the card could be accidentally ejected and lost. A flap or door to cover this area would have been a useful addition.

The drone itself is only one part of the story here, however. The DaVinci comes with its own remote control, so there's no need to pair it with your smartphone, as is the case with many other drones on the market.

Not only does this remote offer twin-stick control, auto take-off and landing buttons, and much more besides, it comes equipped with an color LCD monitor which allows you to see through the drone's eyes (well, eye), as well as get information on elevation, the number of available satellites for GPS, direction, speed and your remaining battery power.

The Aerix DaVinci doesn't have the build quality of a pro-level drone, but it's rugged enough to withstand some pretty serious bumps and tumbles. During our review the unit suffered some rather violent landings, and hit a few fences and trees, but it never showed any signs of damage or impeded performance as a result; and should the worse happen, included in the box are a range of tools for making running repairs, and some spare propellers.

Thanks to the physical controls offered by the unit's remote, handling the DaVinci is a breeze. The remote enables you to take off and land with a single button press, and it's possible to use GPS to hold the drone in position when you're capturing photos or video. There are also flight modes, such as a smooth orbiting maneuver, which you can use when you want to focus on getting good images.

The DaVinci is capable of a top speed of 30mph, and, despite its diminutive size, can cope with moderate winds. It's not as nippy and responsive as DJI's machines, but those cost significantly more.

We did notice that on our first few flights the craft struggled to maintain position, but calibrating the compass and accelerometer largely sorted out this problem. Even so, the drone's lack of propellor guards means you may want to avoid using it in enclosed spaces.

The Aerix DaVinci is designed to make life as easy as possible for novice drone fliers, and comes with a range of aids and safety features which enable you to concentrate on straightforward control.

The operational range is quoted as around 250 meters, and the DaVinci is capable of hitting an altitude of around 300 feet. The video feed to the monitor gets really glitchy beyond those limits, but we expect most users won't want to send such a small drone too far into the distance.

Battery life is a little disappointing; a single charge gets you around 15 minutes of flight time. It's not like the DaVinci is alone in this regard – stamina on smaller drones is a real problem – but we'd have hoped for at least 20 minutes per charge.

You can purchase additional batteries, so you can hot-swap when you're out in the field, and we'd suggesting doing so, otherwise it can feel like your flight is over as soon as it has begun. Helpfully the monitor will inform you when the juice is running low, so you can get the drone back safely before it runs out of power.

A full charge takes around an hour and a half, and it's important to note that both the remote control and the LCD monitor also require charging between uses.

The DaVinci can shoot HD stills and capture 720p video, but to be brutally honest the quality of neither is that impressive. Again, it's a matter of expectations given the price, but the competition in this area of the drone market is hotting up, and for around $700 / £500 it's possible to purchase some seriously decent aerial photography drones these days.

While – in spite of its name – the DaVinci won't be snapping any masterpieces you'd want to blow up and hang on your wall, the camera is perfectly adequate for taking shots and video which you can share online. It's just a shame that the image quality is so muddy, and that colors are so muted.

The fact that you get (almost) everything in the box is a real boon here, and having a dedicated remote control means the Aerix DaVinci is easy to fling around in the air. The design may look cheap, but this is one seriously robust drone, and it offers some impressive performance for the price.

Photo and video quality aren't great, and the below-average battery life means your flights won't last all that long. We'd also have liked to see some kind of propellor guard, as the DaVinci can be quite hard to keep stable, especially when there's a slight wind, and you risk accidentally crashes and damage to the props.

If you're looking for an all-in-one drone solution that's easy and fun to fly, and you're not expecting stellar photo and video performance, the Aerix DaVinci is a good choice for budding flyers – but those who prioritize image quality will want to spend a little more cash elsewhere.