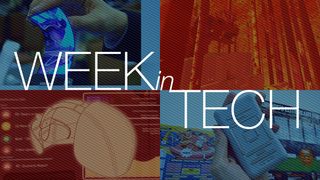 Even in the world of technology, some weeks go by slowly. Not this one. In the last seven days we've experienced the most powerful PCs ever imagined, discovered the future of broadcasting, seen how AR, VR and 3D scanning could transform pretty much everything, and been amused by what looks like a very silly hat. Not only that, but we've been getting the gen on E3's most exciting games, and wondering what exactly one of our colleagues is doing in a toilet cubicle, naked. It's a particularly packed Week in Tech!

More power! That was Computex 2016 in a nutshell, as Kane Fulton explains. "The 36th Computex has returned with a bang in Taipei, Taiwan, unleashing some of the most powerful desktop PCs and gaming laptops we've ever seen," he says. "Vendors including Nvidia, AMD and Intel have been pushing their next-generation processors and graphics cards, resulting in one of the most interesting events in years." Some years we struggle to pick two or three Computex highlights; this year we ended up with 15 – and every one's a cracker.

It's nearly here: the annual Electronic Entertainment Expo, or E3 for short. As Jon Porter says, it's "probably the single most important event for gamers all year long. It's here we'll get our first look at the big franchises that will keep our consoles and gaming rigs humming later in the year and, if we're lucky, a sneak peek at next-gen hardware, too." While we've made some eminently sensible predictions about E3 2016, we've also encouraged Parker Wilhelm to get his wishful thinking hat on. The result? Five predictions for E3 2016 that almost certainly won't happen. One of those features Apple, whose WWDC keynote takes place just as E3 kicks off. Coincidence? We don't think so.

Deus Ex's predictions are too close for comfort

"From the rising influence of giant mega corporations, to a growing wealth gap, to the way humans and technology are converging – sure, Deus Ex is a game about conspiracy theories, but you don't need a tinfoil hat to see some of the parallels." That's Hugh Langley exploring the parallels between Deus Ex's near-future dystopia and, well, today's present-day dystopia. In conversation with Deus Ex's developers he uncovers all kinds of interesting info, but perhaps the most exciting is the tantalising prospect of hacking in VR – or maybe it's the Adam Jensen bionic hand.

OnePlus Two plus one equals OnePlus 3

Samsung thinks you're ready for its jelly

Samsung on a plate! Samsung on a plate! Wibble wobble wibble wobble Samsung on a plate! Reports suggest that Samsung plans to launch two super bend-o-phones with a flexible screen as early as next year. One of the devices will be five inches in phone mode, but will fold out to eight inches for tablet use. There'll be a second foldable phone that will apparently resemble a make-up compact… OR A MOTOROLA RAZR MADE OF PIXELS! Sorry, we got a bit excited there.

The Lenovo phone that can do that Tango

Imagine if your phone knew exactly where it was – not outdoors, but indoors. Sounds dull? Well, yes, but it isn't. Google's Project Tango has been in the works for a while now, and now the first Tango-enabled phone, the Lenovo Phab 2 Pro is here. As James Peckham explains, Project Tango "may be a game changer for the way we navigate around the world and open up indoor navigation on mobile devices for the very first time." It's a combination of AR, VR and 3D mapping, and it could revolutionise everything from redecorating your home and playing games to finding tins of beans in the supermarket.

Magic Leap is one of the most secretive companies working in AR/VR/Mixed Reality, but a patent shows what its high-tech headset may look like. As Parker Wilhelm puts it, it has "what we can only describe as a 'near-future security guard from Mirror's Edge' kind of look." We're surprised to see that it's more Oculus Rift than Google Glass – but then again what you see in a patent application is usually very different from what you end up strapping to your face.

The BBC, VR and you

What will the VR broadcasting future look like? We've no idea, so hurrah for the good old BBC, which has put some of its best minds on the job to develop VR-based programming to discover what works, what doesn't and what'll have VR users retching into the nearest wheelie bin. As Jon Porter explains, its researchers "have the freedom to do the messy experimentation to learn what works and what doesn't, which technologies have a future and which are mere gimmicks, and once they've worked to find a solution they're free to share this information not just internally at the BBC, but with the rest of the industry".

Our man gets naked so you don't have to

"I've just spent half an hour in a toilet cubicle at work. Naked," writes Gareth Beavis, TechRadar's Running Man of Tech. "Naked and spraying water all over a metallic bar of soap and rubbing it all over my body. For once, this wasn't just for pleasure." No, it's not an imminent final written warning: it's the Skulpt Chisel, a wearable that works out your body composition on a per-muscle basis. Does it work? It does! Will "all the taunting from my youth will be drowned out by awesome sexiness"? Probably not!