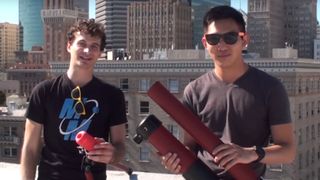 GoPros have given the internet so, so much. From skydiving off a helicopter to diving with sharks to the racing scene of Tokyo, Japan, the miniature cameras bring us no shortage of visual experiences from places more fragile cameras would fear to tread.

Enter Ecletical Engineering, made up of two gents named Ryan and David, who decided that the next logical step is to shoot a GoPro Hero 4 Session out of a cannon.

The two built a pneumatic cannon from scratch, similar in design to what you see shooting t-shirts into the rambunctious crowd during a sporting event. The duo were then able to create a functional projectile out of a GoPro camera, resulting in some genuinely entertaining footage as it soars through the Bay Area sky.

Not only did the team create their own cannon, but they also utilized a 3D printer to make a special casing for the GoPro that would both stabilize the footage as well as protect it upon impact.

The video also breaks down the mathematics used in predicting the GoPro's trajectory, adding to the "I should have paid more attention in physics class" factor. It also ensured that the catcher, baseball glove in hand, would be in the exact right place to safely receive the GoPro/mortar hybrid.

Even the company behind the camera approved of the stunt, with the official GoPro YouTube account saying, "Nice work, boys! Keep it up!" in the comments of Eclectical Engineering's video.

For those wanting to build a camera-launching cannon of their own, Eclectical Engineering posted a guide on their webpage, ensuring anyone with an open field, some elbow grease, and access to materials can join in on this high-tech game of catch.

While this is the first, and currently only, project under Ecletical Engineering's belt, the team promises more videos to come. They are also taking suggestions for project ideas on their webpage, should any backseat engineers have a stroke of inspiration.