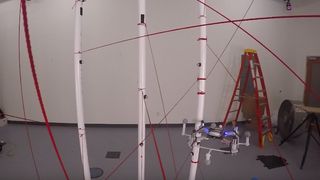 If Christmas is good for anything, it's videos of people opening drones and breaking them only minutes later. But fear not, the Massachusetts Institute of Technology has discovered a way to make drones seemingly impervious to any obstacle.

The video, which you can see below, shows drones doing donuts and figure-eights through an obstacle course that includes strings - is that a sky net? ho ho - and poles.

The algorithms, which were used in last year's DARPA Robotics Challenge, help the tiny aircraft to observe the free spaces rather than the obstacles and find a collision-free route. It's described as a "glass half-full" approach which is better for navigating smaller spaces.

The final part of the video shows a different but similar project in which a small fixed-wing airplane is able to fly through a space without any prior knowledge, even with wind being blasted at it.

PhD student Anirudha Majumdar pre-programmed a library of "funnels" which the drone searches through as it flies to pave a route that's collision-free. "With a large-enough library you can be certain that your route will be clear," he said.

According to MIT's published research, Majumdar's algorithm can easily be extended to drones of different sizes, vehicles and robots.