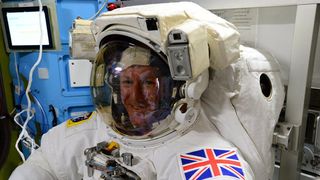 Tim Peake Tweeted his excitement at having completed his walk, even though it came to a premature end.

A water bubble developed in Tim Kopra's helmet during the walk, and the team decided that because they completed the main objective of replacing the power regulator, they would cancel the rest of the spacewalk and return to the space station.

Although the Brit had previously assisted colleagues Tim Kopra and Scott Kelly on an unplanned spacewalk that took place in his first week in space, this will be his first mission outside the safety of the station.

Peake has been tasked with performing a variety of emergency repairs along with fellow Astronaut Kopra. They will replace a failed power regulator, cables and valves to keep the International Space Station functional.

Replacing the power regulator is not without risk, as high voltage discharges prompted by exposure to the sun could prove problematic. For that reason, there is a 30 minute time limit on the procedure, set to be completed while the ISS is still in shadow.

On Earth, Peake spent time rehearsing this particular walk, so he stands every chance of meeting all the targets - especially with help from the ISS as well as the folks back at Mission Control.