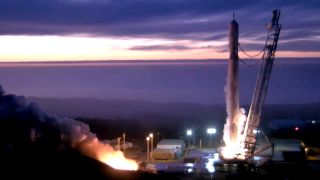 Less than a month after becoming the first rocket to vertically land after launch, the SpaceX Falcon 9 is looking to break ground once more by doing away with the ground altogether.

On Sunday, January 17, at 10:42am PT/1:42pm ET/6:42pm GMT, SpaceX will launch the Falcon 9 once more, this time aiming to stick the landing out at sea on an unmanned watercraft.

NASA is providing spectator access for launch day, with NASA TV broadcasting the entire proceedings from the pre-launch conference to the countdown. The Jason-3 official blog is also webcasting the launch live.

Weather conditions should be favorable for the launch, but if it's not, another attempt will take place Monday.

After two failed attempts to land the standing rocket at sea, settling the Falcon 9 on a small landing pad rocking on the waves will easily be one of SpaceX trickiest touchdowns. Will the third time be the charm, or will failure beset the privateer spacecraft from another record? We'll find out this weekend. Below, you can watch a failed SpaceX ocean landing from April.