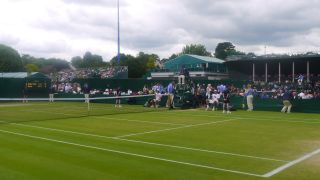 Wimbledon's famous All England Lawn Tennis and Croquet Club, bedecked in the iconic purple and green and overflowing with Ivy, flowers and generations of tradition might, at first look, seem like a strange place to be contemplating how technology and sport have become such familiar bedfellows.

And yet this most traditional of sporting environs is embracing technology on a whole host of levels, whilst maintaining the dignity and history as the home of tennis.

Mick Desmond, the AELTC's commercial and media director explained that there was an "alchemy" in the balance of seeking what's new and innovative whilst understanding and enhancing what makes this most famous of tennis tournaments great.

"We look at what's true in our brand in terms of the all-white dress code, the grass courts and the strawberries and cream, and as an event we do transcend the sport. We look at the things that make us special and we amplify them.

"But in the digital realm particularly we can be very innovative and push the boundaries… whilst still enveloped in a Wimbledon way."

This intent, according to former England cricketer and academic, Ed Smith, is not as new as many might think - insisting that embracing the latest technology has actually been at the heart of sport's development.

"If you think about sport as we now play it, it's rested on a series of technological evolutions," he insists, taking us on a whirlwind tour of innovation, from lawnmowers to the iPhone via vulcanized rubber and, of course the impact of sport in the media.

"The year 1923 brought the moment that changed sport forever - a radio station in New York saying we're going to put every second of the World Series on air. And then TV creates a whole new energy for sport - allowing it to become the world's lingua franca. In fact I'd say it is the most important shared culture in the world."

At Wimbledon, IBM is at the centre of Desmond and his team's plan to reinvigorate tennis through data, and create their own '1923 moment' while remaining respectful of those all-important traditions. In the bowels of the broadcast centre, IBM has what it calls a bunker, and it is within these technology-packed rooms that the digital magic happens.

Sam Seddon, IBM Wimbledon Client and Programme Executive, explains how the now famous cognitive and analytical abilities of the Watson AI is being brought to bear on the reams of data the company is collecting from the tournament, and what impact it has on our social media, our apps, the media coverage and the commentary.

"We start by asking 'how do we help Wimbledon to be the best tennis tournament in the world? How do we help them achieve greatness?' And if you take something like social media the challenge that we're addressing here is 'how do you get a millennial to take an action within a six second window to interact with my social media rather than anyone else's?'.

"The limited opportunity window you have with young people on social media [means] that people need to see [the information] there at that point of time and that's where something like the Watson capability helps us, because we're using the cognitive solutions and capabilities of Watson to understand the reasons behind what is happening in the world of social media around sport and particularly around Wimbledon.

And the analysis - being performed at a scale that would be impossible outside of computers - extends beyond just tennis - with IBM understanding that to resonate the conversation needs to look outside of what's happening at Wimbledon to what's happening in the wider world of sport.