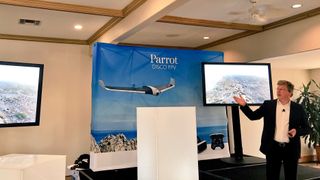 Just a few decades ago, people thought there would be no reason why anyone would want a computer in their home. Today, most of us don't even know how we'd survive without our laptops, phones and tablets. Now, there's a new sheriff in town - drones.

These flying robots are no longer relegated to the realm of science fiction, but instead are revolutionizing 2016. While the biggest companies, including Facebook, Amazon and Google, are working on drone technology to further their innovations, countless smaller drones flown by regular Joes and Janes are taking to the skies, too. We can't help but to think - could drones be the next personal computer?

We had the chance to sit down with Parrot Founder and CEO Henri Seydoux in Palm Springs, Calif. this week at the official launch of the company's newest drone, the Disco. Parrot is well known for its Bepop drones, but the Disco offers something different.

Going on sale in September for $1,299/£1,150, Disco boasts a fixed-wing frame, speeds of up to 50mph, flying time of up to 45 minutes, first-hand views via its Full HD camera, and automatic takeoff and landing capabilities.

For Seydoux, though, drones aren't just neat toys to play with - they have the power to change how we see the world.

"The drone is one of the unexpected things you can do with the technology of today," says Seydoux, whose background in journalism gives him a unique perspective in storytelling. He says he wanted to create a new story from a different vantage point, one from up above. Seydoux even goes so far as alluding to Icarus and his flight too close to the sun.

So, he left journalism to create a never-seen-before product. Today, we have Parrot drones.

Videogame in the sky

Parrot's Disco is the first fixed-wing drone, a.k.a. "ready-to-fly," and aims to revolutionize how we interact with the outdoors, from seeing the world from a new vantage point to the different activities we'll partake in.

We first saw the Disco at this year's CES, but it's since added a headset, called Cockpitglasses, to the mix. This is Parrot's first-ever headset, and not something we see most drone makers attempt.

Much like the Samsung Gear VR, the Cockpitglasses require you insert your phone. Once on, it's a fully immersive experience, as if you're in the cockpit of the drone - you see what it is sees. You can use the controls on the transmitter to look left, right, up and down thanks to the 180-degree field-of-view camera on the Disco.

Henri says wearing the goggles "gives you the feeling that you are the bird - that you can fly." A "modern day videogame," Seydoux believes this is the future of virtual reality headsets.

Put on a headset, fly a drone, and see what it sees - it's as if you're playing a real-world videogame.

"You can fly in the mountains, in the air - it's the videogame of today," Seydoux says.

As aircraft, drones face tough regulations, though in the US, regulators are starting to address citizens and companies taking to the skies in order to ensure safety for all.

When asked about safety and regulations, Seydoux doesn't seem concerned, stating that flying a drone should always be handled with discretion, like driving a car.

Today, drones are being used for everything from aerial photography and surveillance to crop monitoring, agriculture and wildlife conservation.

Sitting in 108-degree heat on a deserted golf course in Palm Springs, Seydoux is clearly ecstatic about the future of drones. He doesn't see them as just a hobby, but as part of a new future in which the devices help us do what hasn't been done before.

One area of particular interest for Seydoux is how drones can assist in agriculture.

"Drones are already used for agriculture; they fly over the fields and take pictures of crops and know exactly how much water and fertilizer you need to put here and there," he says. "Drones are becoming more and more useful for multiple usages."

As for consumer drones, Seydoux said earlier this year that Parrot sold hundreds of thousands of its $99 fliers, but he isn't stopping there. He wants to "wow" consumers with the coolest new tech, and the Disco is his latest attempt to do so.

Ask what's next for Parrot, though, and he'll reply with an automatic, "I cannot tell you."

He did drop hints that his next project will be aimed toward a female audience, but it's still under wraps.

Until then, we can only image Seydoux will keep dreaming the impossible.