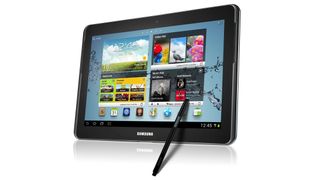 Get ready for Round 2 in the legal boxing match between Apple and Samsung as Tuesday Apple argued before a federal judge to add the Galaxy Note 10.1 and Android 4.1: Jelly Bean to a list of patent-infringing products.

U.S. Magistrate Judge Paul S. Grewal heard the arguments in a case that is separate from the August trial that saw Apple walk away with a ruling worth $1.05 billion (£665 million, AUD$1 billion).

Apple's requests seem to be in response to an Oct. 1 bid by Samsung to add the iPhone 5 to its own list of patent-infringing products, continuing a tit for tat contest that now appears poised to bring Google into the mix.

Android 4.1 is a Google-owned operating system and should Apple's bid bring about the potential for a Jelly Bean ban, Google might have something to say about it.

Samsung began selling the Galaxy Note 10.1 tablet in the U.S. in August, though the tablet comes equipped with a stylus pen, a feature unheard of in any Apple iPad.

No details were immediately available as to what arguments Apple presented in court to justify banning either product.

Clearly the turbulence between these two won't smooth out anytime soon, so it might simply be best to sit back and watch the drama unfold.

An Apple lawyer informed Grewal that the Galaxy Nexus is the only Jelly Bean-running phone Apple wants added to its new complaint.

However, the same lawyer said Cupertino would like to add other 17 devices to the complaint. Those devices could use a stylus, yet don't ship with one.

An attorney for Samsung said the South Korean company opposes the addition of "stylus products in 17 new devices," saying that by "adding the stylus, Apple is going to enlarge the case significantly."

Grewal didn't issue a ruling Tuesday for fear that if he denied either side's requests, the companies might launch into another set of suits. The case over the new products is scheduled for trial in 2014.

The fruity firm also added Samsung's most popular handset - the Galaxy S3 - to its list of infringing products in August.

Hearings pertaining to the August case (of which Koh presided over) will commence in December.

Apple will argue that the Galaxy Tab 10.1 and eight Samsung smartphones should be banned permanently from the U.S. while Samsung will make its case for why August's billion-dollar ruling should be chucked out due to juror misconduct.

Koh already lifted a ban on the Tab 10.1 after deciding there were no grounds for keeping the preliminary injunction in place after jurors found it didn't infringe on the patent that was the grounds for the injunction, however Apple argues the tablet violates other patents.

TechRadar as reached out to Samsung and Apple for comment and will update this story if and when the companies respond.