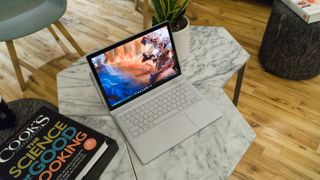 Earlier this week the existence of Windows 10 Lean was discovered, and after a bit of digging more details have been found about this lightweight OS, as well as hints as to what Microsoft plans to do with the software.

We knew that Windows 10 Lean would have an installation size that was 2GB smaller than the standard version of Windows 10, and that this would necessitate cuts to features and apps to keep the size down.

However, Twitter user Lucan, who first brought attention to the existence of Windows 10 Lean, has done some digging and discovered where these cuts are coming from, and found that over 50,000 files that are present in Windows 10 Pro are not in Lean.

There are ~50.5K files that are present in Pro but not in Lean, when looked at from a broad perspective. (Comparing full system drive contents)Among those are common power tools such as PowerShell, regedit, mmc, msinfo32, etc. Internet Explorer and many Inbox apps are also gone.April 24, 2018

That’s quite a hefty cut, and the missing files include common tools such as PowerShell, regedit, Internet Explorer and various other Windows 10 apps such as Mail and Windows Media Player.

For people who never use those tools, having a version of Windows 10 that ditches them in favor of a smaller installation size will seem like a pretty decent trade off.

Meanwhile, Inside Windows has got a full list of missing files, giving you an idea of what is missing.

However, with Microsoft pushing Windows 10 S and 10 S mode as more secure and trimmed down versions of Windows 10, where does that leave Windows 10 Lean? The clue to Microsoft’s plans for the operating system can be found in the files that have been left intact – or added.

For example, it looks like support for telephony APIs have been included, which usually aren’t in standard versions of Windows 10. Could this hint at Windows 10 Lean coming to smartphones, after the failure of Windows 10 Mobile?

As Lucan points out, there’s also a build of Windows 10 Lean for ARM devices, with ARM hardware usually found in mobile devices such as smartphones and tablets, which could be another hint.

Cutting 2GB from the installation size would certainly make it a more viable operating system on tablets with limited storage space. So, while we may not see a new wave of Windows 10 Lean-toting smartphones, we wouldn’t be surprised to see the operating system crop up on future Windows tablets.