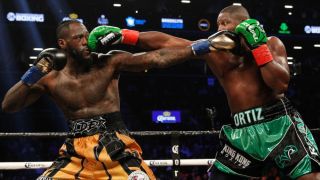 Fight night has arrived in Las Vegas with a boxing match that promises to shake Sin City! Heavyweights Deontay Wilder and Luis Ortiz will fight it out for the WBC Heavyweight title - it's the Bronze Bomber against King Kong round two. You can find out who will come out on top by grabbing a live stream of Wilder vs Ortiz 2 wherever you are using this handy guide.

The challenger Ortiz dominated the early rounds when the two fighters first met back in March last year, only for Wilder's class to eventually show in the 10th round when he delivered a TKO.

Wilder vs Ortiz- where and when?

It's very nearly time for the huge Deontay Wilder and Luis Ortiz rematch at the MGM Grand Arena in Las Vegas.

You can expect the main fight to begin at around 9pm PT local time and midnight ET. That means an early 5am GMT start on Sunday morning for fight fans tuning in from the UK.

For Wilder, all roads currently look to lead to Tyson Fury and a win against Ortiz should ensure a rematch with the Gypsy King. The champ also has his hugely impressive 42-fight unbeaten record to protect.

Forty-year-old Cuban star Ortiz may have age, height and reach against him as he goes in to face Wilder once more, but he knows he can hurt the champ following their last back-and-forth encounter. Ortiz also has some momentum going into the fight, having chalked up three impressive wins together on the spin.

Saturday's fight has all the ingredients for being one of the year's best dust ups. Read on to find out how to get a Wilder vs Ortiz live stream from absolutely anywhere in the world.

You can scroll down this page for information on who'd broadcasting the fight in different territories. But if you want to watch the boxing outside of your country you may find that the content is geo-restricted. That could mean that, despite having access when on home turf (and having potentially paid for pricey subscriptions), you are blocked while away. Fret not, that can be rectified with the use of a clever piece of software called a VPN and won't involve lurking around dodgier parts of the internet for a ropey old stream.

Once you've downloaded and installed this software you are able to change where you appear to be thanks to some smart IP address bouncing. That not only gets around geo-restricted content but also helps keep your identity more secure when online.

These Virtual Private Networks are thankfully easy to use. Simply select one of our best VPN picks (or opt straight for our number one favorite ExpressVPN), open it up and pick out your country of choice from the 'choose location' menu, and then start watching as if you were sat back at home. Easy!

ExpressVPN is the best all-round VPN for streaming, comes with 30-day money back guarantee and 3 months FREE when you sign up for an annual plan.

And don't get the impression that this is all VPNs are any good for. They've also become the first line of defence for millions of people against cyber crime and security breaches.

How to watch Wilder vs Ortiz 2: US streaming

The Wilder vs Ortiz rematch  will be shown exclusively live in the US on Fox Sports via Fox PBC. That means you're looking at PPV. The price for such a massive heavyweight encounter? A suitably hefty $74.99.

Not in the US this weekend but want to watch the PPV stream anyway? You can use a VPN to change the IP address of your laptop, mobile or streaming service and catch the coverage as if you were back at home.

How to stream Wilder vs Ortiz live in the UK

Those in the UK with Sky Sports TV will be able to watch the fight for free, although you will have to stay up to beyond 5am for the pleasure.

Sky Sports Action will be the channel to head to if you already subscribe, plus you'll be able to live stream that directly from the Sky Go app or on your computer too.

If you don't have Sky Sports normally, there is a way to watch it in the UK. NOW TV offers a Sky Sports Day Pass, which if you buy for £9.99 will give you access to the fight. Be sure to make the most of that Day Pass and watch as much sport as you can in 24 hours (all of Sunday's Premier League football, for example).

That pass will work on select smart TV devices, PC, Mac, iPad as well as iPhone and Android devices with the respective apps too. Plus if you're out of the UK and need a stream we can recommend a VPN to change your IP location.

How to live stream Wilder vs Ortiz 2 in Australia

Main Event PPV have nabbed exclusive rights to show the big rematch Down Under.

It'll set you back $49.95 with coverage starting at 1pm AEDT on the Sunday with plenty of replays to keep you going afterwards.