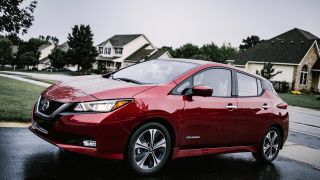 The 2018 Nissan Leaf is an all-electric that has been around the block a few times.

Not as many times as you might think, since it has much lower range (at 151 miles) than the Chevy Bolt (at 238 miles) and the fully equipped Tesla Model S (at 315 miles).

Yet, in a recent test, there are a few high-tech options that will make you wonder if this might be the right EV for you.

First, you should know that the Leaf is a budget car in every sense of the word. It’s meant to be light, not that sporty, small, and a bit short on tech features.

The amazing touchscreen display on the Bolt and Model S help you manage all of the settings and see what's happening with the electric motor at all times. The Leaf, not so much.

The display is small and a little disappointing – you won’t see any animations of a car that shows how regenerative braking works.

Instead, you’ll see a bland blue and black display that shows simple data feeds like the range and how many extra miles you can gain from turning off the climate control settings.

For any tech connoisseur, it might be a letdown given the trend in cars to provide richly detailed touchscreens, both above the steering wheel and in the dash.

The Leaf debuted in 2010, and the new model has a few more curves and enhancements, but the displays look roughly the same.

Fortunately, there’s a few other features to keep you occupied. One is a new E-Pedal that allows you to drive the car without using the brakes.

It’s similar to a feature you’ll find on some all-terrain vehicles like those made by Polaris called Engine Braking.

“The Leaf’s E-Pedal, which comes standard across all grade levels, allows the driver to accelerate, decelerate and stop by the car using the accelerator pedal alone,” says Jeff Wandell, a Nissan Leaf spokesperson. “The Leaf comes to a smooth and complete stop by simply releasing the accelerator. Furthermore, E-Pedal will even hold the vehicle in place on an incline – a feature only found on the Leaf.”

Another feature to help with range is the Eco button, which provides a little less power for driving and extends the range by a few miles.

In our tests, the 151 mile rating is about right, as long as we activated Eco mode and drove in a careful way – easing up to stop-signs and slowly accelerating.

Range dropped to more like 130 miles in a few of our tests after depleting most of the battery when we drove in a normal way, merging into traffic, using the air conditioning the entire time, and speeding up quickly.

We did like the new Nissan Leaf app, however. With an updated design, the app makes up for the fact that the touchscreen is not as exciting in the car itself.

You can check the range remotely, lock the car, and even set up a text message alert to tell you when the Leaf is charged. You can also enable AC so the car is cool when you start driving.

And, all of these settings add up to an effective, low-price, all-electric. The Leaf is a smart buy because of the costs to drive it: the range is lower, but so is the price.

Take a closer look at the 2018 Nissan Leaf in the gallery below: