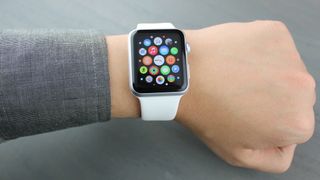 The Apple Watch Sport has the best image quality

The Apple Watch is out and making its way to wrists around the world in a variety of different versions, but in a surprising revelation it appears that the cheapest edition, the Apple Watch Sport, has the best screen out of all of them.

In many respects the displays are very similar, as all three models come with a flexible OLED display (Apple's first foray into the screen technology) with a diagonal size of 1.53-inches and a resolution for the 42mm versions of 312x390 – resulting in a pixel density of 322 pixels per inch.

Beauty is in the eye of the watch wearer

It also means that at certain viewing angles,the more expensive Apple Watch versions suffer from slightly more colour shift, though they perform better than the Apple Watch Sport when it comes to retaining brightness when viewed at an angle.

DisplayMate found that all versions of the Apple Watch offer fantastic screen quality, however if you go for the more expensive versions with sapphire displays, you will be making a compromise in image quality in return for a more scratch resistant display.

Hopefully the next generation of Apple Watch will come with Enhanced Sapphire, which will reduce the reflective quality of the screen, making it perform better in ambient light and eliminating the need to make any such compromise in the future.