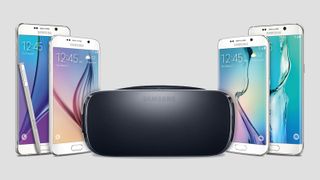 Samsung Gear VR, the latest headset powered by Oculus virtual reality technology, is now available for pre-order in the US. The new consumer headset, which is a refined version of last year's model, will release on November 20 in the US and offers compatibility with the latest Samsung phones, including the Galaxy Note 5, Galaxy S6 Edge+, Galaxy S6 and Galaxy S6 Edge.

The design has seen several subtle improvements, like the removal of the hair-flattening plastic band on its top. But there's a lot more change under the hood that deserves your attention. First off, the price has received a hearty 50% slash, arriving at retail for $99. It's a measly fee for Samsung phone owners to buy into this now-proven technology.

Next up, Oculus and Samsung have a solid plan in place to provide eager viewers with a lot of content over time. There are original games coming out for the headset, and you'll also be able to play some old arcade favorites, like Pac-Man and Sonic the Hedgehog in a virtual arcade called Oculus Arcade.

Extending past the gaming world, Oculus Video provides viewers with video content from popular platforms, like Vimeo and Twitch, as well as more than 70 feature-length films.

The first Samsung Gear VR, although generally available for purchase, was more of a soft launch meant for developers to get their feet wet with a cheap development kit. Now, it's ready for the big time. You can pre-order right here.

When asked about global availability and pricing, a representative for Oculus and Samsung stated that launch dates for non-US territories will be announced soon.