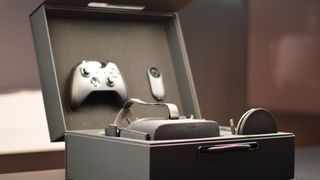 If you're eagerly waiting for your Oculus Rift after preordering it this week, it should come packed looking like the picture above, although the headset itself might be a little different.

Oculus says changes are still being made to the headset, but didn't reveal any specifics. It's likely this means small tweaks here and there to improve comfort, rather than anything major, although the company said it would reveal more in late February.

For now, you can expect to see your Rift shipped in a classy-looking box that's simple and sleek, and filled with most of the goodies you'll need to have a grand 'ol time in the virtual world.

There won't be any Touch controllers just yet, but the box will hold the Rift, sensor, Xbox One controller and Oculus Remote, which enables you to navigate the Oculus Store and control the volume.

You also get two VR games bundled with the Rift headset: the space shooter EVE: Valkyrie and the 3D platformer Lucky's Tale.