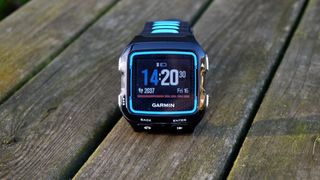 When running, the last thing you want when trotting along is something distracting you from the task of just putting one foot in front of the other as quickly as possible.

Headphones falling out, bleeping watches inaccurately tracking distance, clothing hurting / fitting poorly are all things that will cause the air to turn blue around a runner who's embarked on an 18 mile run to find things are less than optimal.

I'm still doing the 10k a day for charity but building up to the finale marathon, so I need to make sure my gear is going to be quietly running in the background, helping not hindering my progress. Luckily, this week's choices turned out to be perfect for the job:

I've already reviewed this running watch, but it's become such a key part of my running gear that I felt the need to talk about it here too.

Let's get the big issues out of the way first: the cost is pretty high at nearly £400 (if you want to get the heart rate monitor too, which really does augment the experience) and it's a little chunky to wear day to day.

But it's actually, for a sport watch, well designed and compact, with the white / red or black / blue colour combination looking stylish on the wrist.

There are two things I love about this watch: firstly, it can do pretty much anything sports related, and secondly, the battery life is brilliant.

This is a multi-sport watch though, which means it's equally as adept at tracking you swimming and cycling as out bouncing through the streets on two feet. If you're not into triathlons then you might want to consider the Forerunner 620, which has a very similar interface and the same ability at tracking your runs, but is £70 cheaper.

That said, the battery life isn't as good, and doesn't have the same range of metrics - nor can you currently download new watch faces from Garmin's new Connect IQ app store.

But let's get back to the 920XT: it's an excellent watch and connects perfectly to your smartphone. It will track steps throughout the day then seamlessly move into running mode, with a quick GPS fix (most of the time, as long as you're not in heavily built-up areas) from the smartphone really helping out.

The in-run display can show as much or as little as you want, with the amount of data fields customisable. So if you only want to know current pace, heart rate and estimated finish time for any given distance, that's possible with minimal button pushing.

The pace is 'smoothed' to show in 5 second intervals, so you'll only ever be going 4:45/km or 4:50/km for example - there's no in between, but it does keep the speed displayed more regular.

It's a little more harsh on the pace and distance as you run: it can show up to 50 metres less over 5km, for instance, but for the most part it's unerringly accurate and that under-representation is actually quite a good motivator.

It will even show smart notifications when connected to a smartphone, which means you'll get updates when someone texts, calls or emails you without needing to grab the phone out your pocket.

You can turn off those updates when training (which was the thing most people worried about when I showed them the ability) but for me, knowing who's phoning you on a run means you can easily make the choice whether to stop or not.

This is one of my favourite running watches of all time: the battery life is excellent, and for me is worth the extra money over the 620 if you think you might ever dabble in the pool or on the bike. Plus you can even set up your own strength sessions too - all uploaded seamlessly to the Garmin Connect app.

It's expensive, but if running is your thing then there has to be one big investment. I wouldn't look much further than this if you're thinking of getting a 'proper' running watch.

Best for: The committed data-fiend

These headphones are an interesting proposition: guaranteed to never hurt and to never fall out. If you've read the previous weeks' columns you'll know I've been struggling with earbuds in general throughout my running career thanks to growing what, in theory, appear to be the worst ears ever made for holding little nuggets of sound in.

So to hear of these was a real win as they should solve all the problems - a guarantee is a guarantee, right? OK, they're not Bluetooth, which means I had wires to contend with on a run (not my favourite thing in the world, but manageable) and at £45 not a huge outlay for the top-level buds in this range.

Actually, the Focus 400 earbuds probably have the most manageable cord I've ever run with, as the main 'three pronged' control centre doesn't dangle irritatingly under one ear but in the join between the two cables running up to your head.

Place this under a t-shirt and it sits very quietly on your chest, plus it's still easy to press the buttons through fabric. Those keys could be a little more distinct, as you're essentially caressing divots across your upper torso when trying to pause music, but it's generally easy enough to use on the go.

You've probably noticed that I've avoided talking about the earphones themselves so far - that's because I found that they're not as comfortable as advertised. They're far from uncomfortable, but I did have a small amount of pain over a long run on one side.

This can be mitigated by giving them a few twists back and forth before placing the rubber loop into place around your sound flaps, but this doesn't make them insanely well-fitting though. That loop can also fall off the earbud, meaning a panicked rummage through the bag looking for it at times.

That's the bad stuff out the way, but once all set up, the fit is snug and definitely won't see your headphones falling out your ears. Sound quality is a little on the tinny side, but the audio quality certainly isn't something that bothers me when plugging around trails - plus a microphone allows them to work as a hands free kit (although under the shirt means that's a little pointless when running).

The JBL Yurbuds Focus 400 earphones are a very good piece of kit to have in a runner's arsenal - they're not my main headphones for a run as I prefer something wireless, but should the battery run down or some issue creep in with connectivity these are straight out the bag and onto the ears.

Best for: The faff-hating music-listening runner