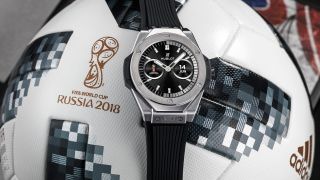 Video assisted referees (what you'll hear refereed to as VAR) has been the one of the most controversial elements of the World Cup 2018, but it’s not the only tech that’s being used on the football pitches around Russia this month.

Wearable technology has come a long way since the last World Cup. Back in 2014, the Apple Watch was only a teaser announced on stage by Tim Cook and was yet to be on anyone's wrist, while watches such as the Moto 360, Samsung Gear S and Pebble Steel were among the bestselling smartwatches of the year.

Now in 2018, the whole space has changed for consumers and it’s different for the players on the pitch, managers on the sidelines and referees running around too.

Below we’re going to break down some of the most interesting wearable tech we know is being used at this year’s World Cup. It may be there is more tech being used for training in anticipation of the competition, but here we're focusing on technology used in the actual games and training just before the competition.

This smart vest you can see above is from a company called Catapult and has a variety of different gadgets being used in both amateur and professional football.

Some teams have been wearing the vest underneath their shirts. Egypt, Serbia, Sweden, Switzerland and Uruguay have been using the vests to track some vital stats that allows backroom staff to interrogate player data more than ever before.

It was a last minute decision from FIFA, but in early June 2018 the organization deemed the tech as safe for players to wear during official matches and most wearing it will have been using it throughout training too.

The Playertek vest comes with a device inside called the tracking pod that’s placed at the back, it's used to record player stats such as their top speed.

It also records information such as the distance covered in a match, where each player traveled and how often they sprinted. It’s basic tech, but the Playertek vest offers that slightly extra insight that may give some teams the upper hand at the competition.

The data can be broken down by the team at a later date to try and mathematically work out a way to improve their strategy.

You may have spotted large smartwatches on referee's wrists during the World Cup so far. This isn't about sporting a bit of sponsored bling, but a way to offer quick communication of the VAR technology directly to each ref's wrist.

The tech used is the Hublot Big Bang Referee 2018 World Cup watch - it’s a Wear OS device that you can also buy right now. It's expensive though, and its main USP is the fact it can communicate World Cup information - a feature that will be irrelevant at the end of the competition.

Referees are fed data about goals scored directly to their wrist within a second of a goal being scored. For those not on the pitch, it also feeds data on when matches are set to take place, when goals are scored (even in other games) and notifications for yellow cards, corners and more.

The watch has even been spotted on manager’s wrists too, with England's Gareth Southgate clearly sporting the device during the England vs Panama game earlier in the tournament. You can still buy the watch but there are only 2,018 on sale - see what Hublot did there? - and each costs around $5,250, £3,750, AU$6800.

Another one for the players here as FIFA has introduced its own Electronic Performance and Tracking Systems, but there are a bunch of restrictions on how the technology can be used.

Trackers can be inserted within the shirts of each player and this way the management team are able to track positioning, passing, pressing and tackles. This is paired with a tablet that shows the game on a 30-second delay.

The idea here is it should limit overexertion for players, which is a big worry especially when some teams are playing in an entirely different climate to what they’re used to.

It should hopefully mean a lower risk of injury throughout the tournament, as well as the analysts and medical staff having an even greater knowledge of player performance and risks.

While this technology isn’t clearly visible during the games like the referee's Hublot smartwatch, this may be one of the most impactful pieces of tech being used throughout the entire tournament.

Fitness trackers and smartwatches encourage us to get up off the sofa and out for a jog, but does tracking this sort of data really make much of an impact on how a whole team plays during the world’s biggest football tournament?

Wearable technology hasn’t been around long enough to make a clear impact over the last few World Cups, but the German national team are convinced it allowed them to make headway to win the 2014 World Cup.

As quoted on GeekWire, Darcy Norman – a performance data analyst for Germany's side in 2014 – spoke at the Consumer Electronics Show (CES) 2015 and said working with Adidas’ micoach technology in training and the tournament made a positive impact back at the last World Cup.

The German team wore the small tracking devices in practice sessions to give a full picture of their speed, distance run and heart rate allowing the team to see how each athlete did. The team could then work out better training to hit the weakspots for each team member.

Data from training was ultimately what encouraged the German manager Joachim Low to bring on player Gotze to the World Cup final in 2014. That happened in the 88th minute of the game, and Gotze went on to score the only goal of the game in extra-time winning it for Germany.

It may not be meticulously tested science that wearable tech is the way for football teams to improve, but it’s hard to deny it didn’t have a positive impact on Germany’s game at a decisive moment.

The less said about Germany's performance at the 2018 FIFA World Cup the better, but perhaps the introduction of all this new wearable tech means we'll see teams play better in the tournament than ever.