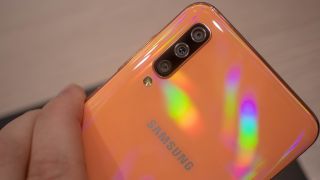 The 2019 range of Samsung Galaxy A smartphones has proven pretty popular with phone fans, and we're already looking forward to what affordable smartphones we'll see in 2020. We've now heard word of what they may be called – but the names aren't as glamorous-sounding as we might have expected.

According to trademarks filed by Samsung with the European Union Intellectual Property Office and spotted by Dutch site LetsGoDigital, the names of the new series of Galaxy A smartphones will simply add a '1'  to the corresponding models in the current series – so they'll be the A11, A21, A31, A41, A51, A61, A71, and A81.

If you were expecting to see the Samsung Galaxy A100, and then the A1000 in 2021 (because, let's face it, things with 'thousand' at the end always sound cool), then you're going to be disappointed if those trademarked names are indeed used.

Samsung wisely gave its 2019 A phones, including the affordable Galaxy A30, extremely popular Galaxy A50 and bizarre yet novel Galaxy A80, more distinct names than the 2018-and-prior phones, which were rather confusingly labelled – and they proved to be an impressive set of mid-range devices, so it makes sense for Samsung not to tinker with the naming too much for the 2020 models.

We don't really know anything about the 2020 Galaxy A series phones just yet, although news of possible spin-offs like the Samsung Galaxy A70S, and an enigmatic Samsung Galaxy A90, has muddied the water slightly.

There will likely be lots more rumors and leaks surrounding the devices before then, though, so stay tuned to TechRadar to keep up to date.