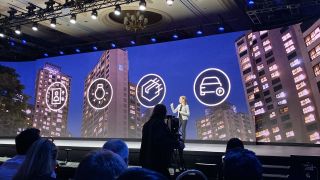 Sadly, the Samsung Galaxy S11 was nowhere to be found at the Samsung keynote of CES 2020 - but here’s all the tech integrations they showed off that will likely appear in the phonemaker’s upcoming flagship.

Curiously enough, very little of the presentation hinted at what kind of hardware will come in this year’s phones. Instead, the keynote painted a picture of a much more integrated home and city life - and since all of that will likely route through Samsung’s smartphones, it’s conceivable that the Galaxy S11 will pack tuned-up Samsung apps to better monitor and control their spaces.

In the home, consider the new bot Ballie, a cute companion that patrols the house and reminds you of calendar events. But with Ballie’s camera, you can also see what it sees, expanding your ability to surveil. While Ballie is a concept and almost certainly won’t come out alongside the Galaxy S11, it’s a good bet that Samsung is looking into making the phone even more of a hub for a connected home - especially if automated help like the Bot Chef make it to market.

Other parts of the keynote were less insightful for the Samsung Galaxy S11, like Samsung’s vague investment in 5G-connected cities. Given how little of the next-gen infrastructure has been built out, it’s doubtful that the company’s upcoming flagship phone will have much data to ingest and give S11 owners relevant insights - say, weather or traffic tips - but it’s possible.

Otherwise with cities, the keynote made a brief nod toward aggregating urban mobility systems into a single payment experience. What would be the easiest way to quickly pay for buses, subways, taxis/ride-shares, bikes, and scooters? Just swiping your Samsung Galaxy S11 with Samsung Pay or an NFC equivalent, naturally.

What’s clearer might be the Galaxy S11’s phone lineup: at CES, we saw both the Samsung Galaxy Note 10 Lite and the Samsung Galaxy S10 Lite. The former is the cheapest stylus-packing flagship-quality phone we’ve seen in awhile, but the latter seems to cannibalize the budget flagship role that the S10e held - so perhaps we won’t get an S11e after all as Samsung chases the premium market and perhaps leaves the “Lite” releases for later in the year.

The other possibility is that Samsung pushes the S11e into a different role. Given the S10 Lite and Note 10 Lite are physically large devices - both sport 6.7-inch screens - the S11e could evolve into the phonemaker's only small-size flagship as its version of the famously diminutive iPhone SE.

More roles for the Galaxy S11

Samsung also pushed hard on its network of devices assisting health and accessibility. Out of the blue, the keynote dropped a feel-good video of blind users donning Samsung Gear VR to see loved ones and themselves, suggesting the company hasn’t completely abandoned its smartphone VR project.

Internally, expect more on-device AI processing, as Samsung leaned hard into keeping Bixby off the cloud as a privacy measure, with 'AI We Can Trust' emblazoned on the screen.

Of course, Qualcomm’s new Snapdragon 865 is lined up to power the Galaxy S11, and given the chipset more or less requires a 5G modem, its likely that some if not all of the new handsets will be 5G phones. Whether this will lead to even higher pricetags for the S11 line is unclear, but we wouldn’t be surprised given the Samsung Galaxy S10 5G was notably pricier than its non-5G siblings.