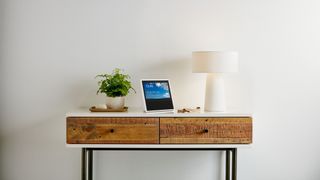 In many ways, it's been a rather good year for the smart home. While thermostats, lighting and security products remain the most popular smart items, 2017 was the year that voice control took off.

Thanks to the growing popularity of the Amazon Echo range (which got a slew of new products, including the touchscreen-enabled Echo Show) and, to a degree, Google Home, smart assistants were the thing to have. And, with their popularity, the smart home was given a massive boost. Finally, there was a natural way to control all of the smart home products, from thermostats to smart lighting, without having to resort to a swathe of different apps, or having to constantly pull your phone out of your pocket.

It's not just about controlling other devices, either, as smart assistants have proved themselves to be central to many homes, from getting calendar appointments to answering simple questions. Being able to do all of this without reaching for a smartphone has made computing a lot more accessible and personable.

Smart assistants have proved to be so popular that many traditional speaker companies have jumped on the bandwagon, integrating Alexa or Google Home with their own products. First to launch was the excellent Sonos One, a full-on multi-room music player that has Alexa built in. Sony followed up with its slightly less good Google Assistant-powered LF-S50G, with Panasonic joining in with the SC-GA10. It's fair to say that you can now get a smart speaker in pretty much any form that you want.

Importantly, the attention that smart assistants have brought to the smart home has meant an increased range of smart devices. This year, Ikea joined the fray with its rather good Tradfri smart lights. Ikea now plans to move into audio, collaborating with Sonos.

Other companies decided to upgrade the smart capabilities of their products, too. Most robot vacuum cleaners, for example, can be started with a voice command; all of Dyson's connected fans, such as the Pure Hot + Cool Link, have an Alexa skill, so that you can control them without having to get up.

Truly, it's starting to feel a bit like the world that Star Trek always promised us. But, we're not there yet, and as far as we've moved, the smart home still has several issues, and many products still feel a little too techy, while talking to a voice assistant can feel unnatural and stilted. These aren't insurmountable issues, but here's what needs to improve in 2018 for the smart home to be truly embraced.

Smart speakers that understand where they are

If you want Alexa, or any other voice assistant, to turn on a light, you have to specify by name the exact device that you want to control. Yet, as many homes have more than one smart speaker, each one should understand which room it's in. So, when you say, "Alexa, turn on the light", the room in the light that you're currently in should just turn on. Sure, this takes some organisation at the back end, sorting things into rooms and, potentially, setting a primary light, but it would ultimately make the smart home easier to use.

Buy practically any bit of smart home kit and then one thing that you can rely on is getting a shiny new hub to match. Enough is enough. The Echo Plus promised to change things with its integrated Zigbee hub, connecting to Hue light bulbs without requiring the Hue Bridge; the first time this has been possible. Yet, the finished product isn't quite there. For example, from the Alexa app, you can't even set a bulb's colour, only its brightness level. You can use voice control to pick a colour, but this is far less granular than the Hue app gives.

A secondary problem is that the Echo Plus can recognise other Zigbee devices, such as switches and motion sensors, but it can't do anything with them. As such, you still need other hubs to get the complete control.

A better future would be where smart home devices use well-defined protocols, such as Zigbee and Z-Wave, and can all be fully controlled via a single integrated app.

SmartThings has gone a long way towards doing this, but it's still limited by device support and a control system that's a little tricky to configure at best.

Apple's HomeKit has improved, and the company has relaxed its standards to encourage more people to use the system. But, relatively few products support Apple Home and control is limited to iOS devices only, cutting out all Android users.

Device control is one of the biggest issues with a smart home. Take smart light bulbs for example. Once installed, you can use Alexa or an app to control them, but if you resort to using the old-fashioned switch to turn the lights off, your bulb loses power and, therefore, its smart capabilities. That's a real shame, as sometimes it's just easier to use a switch than it is to use your voice or an app.

Philips Hue and the Ikea Tradfri at least have a range of wireless controls, but the problem with these are two-fold. First, you end up with two switches: your original one, and the new smart one. Secondly, the smart switches are all plastic and don't look great.

Proper, integrated smart light switches, which replace your existing switch and wirelessly operate your bulbs would change the dynamic and give you more flexible and, hopefully, smarter-looking control options.

Automation needs to dramatically improve, too. Amazon has taken some steps towards this with its Routines, where you can use a defined command to control multiple smart home devices: in my house, saying "Alexa, goodbye" will set the Evohome Heating to Away mode, turns off all of the connected lights and stops the Sonos speakers. So far, so good, but the system can't control every type of device; for example, you can't put Nest into Eco mode, nor can you set a temperature on it. Yet, this kind of simple automation could improve the way we use our homes.

Of course, there are services such as IFTTT, where you can set up your own type of automation, say turning on a light when your security camera picks up motion. Yet, you can't time an IFTTT recipe to run at a set time, say running our rule only after dusk.

Your home should be able to do more things based on whether you're at home or not, yet all too often there are problems. Take Nest, for example, which has pretty good geolocation, which it can use to turn off your heating and turn on your cameras when you go out. Yet, if you set a schedule for your cameras, you get conflicts and nothing quite works as you expect.

I, personally, want my cameras on when I'm out, but I want them on at night when I'm in bed. At the moment, I can't do that. Other devices simply don't have geolocation or only support one phone for detection, which is useless in a busy household.

Using the Life360 service with IFTTT can add some of the features that you need, but you're limited by each device's channel as to what you can do; Nest, for example, doesn't let you set it to Eco mode using IFTTT.

Ideally, Android and iOS would provide a base level Home/Away mode for tracking families, that smart home apps can tap into to provide smarter automation.

The more expert smart home users will probably be reading this, thinking that there's a fix or a tweak out there for these issues, maybe using a Raspberry Pi. That's all fine for enthusiasts, but we're talking mainstream here. So, no more workarounds, third-party fixes and fudges; the smart home industry needs to work together to improve compatibility, automation and location services.

What is the future?

If I had to take a punt on where the future of smart home control lies, I'd have to point to Amazon. The recent Alexa app update added some basic touch controls for smart devices: toggling lights and, with some thermostats, heating modes.

Amazon now has two challenges. First, it needs to improve control for all types of device, for example letting you control light colour and setting a thermostat's temperature; in effect, providing the same controls you get with voice in touch. Secondly, it needs to boost organisation, letting you sort devices into rooms, rather than listing everything alphabetically.

If it gets that right, Amazon will offer similar levels of control to Apple HomeKit, only with a wider selection of products and available on a wider range of devices. That would be a lot more like it.