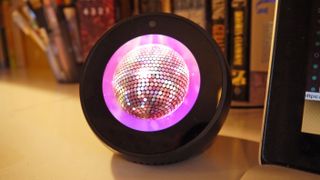 The Echo series of smart speakers by Amazon has been relatively well received in India. And, with the introduction of Google Home in the country, Amazon seems to be stepping up its game by launching the Echo Spot.

The new smart speaker is fourth in the line of Echo devices by Amazon. What makes it different from the rest is its touchscreen display. The first speaker to feature such a display was the Echo Show, but the company has no plans of bringing it to India at the moment.

The Amazon Echo Spot costs Rs 12,999 and is available in two colors, black and white.

In comparison, the Echo Dot is priced at Rs 3,999 but is also a much simpler device. The Amazon Echo costs Rs 7,999 and the Echo Plus is Rs 14,999 - thus creating the dilemma  —  whether to buy the Echo Plus or the Echo Spot when looking for smart speaker.

The Echo Spot looks like its trying to replace your alarm clock, that is if you still use one in this day and age when most people just set their alarms on their phone. Instead of a clock face, the device has a circular 480x480 pixel display that measures 2.5-inches in diameter. It definitely seems like an upgrade over your conventional timepiece, with multiple options between analog and digital clock faces.

The display isn’t just for telling time though. While the regular Echo speakers can read the news briefings back to the user, the Echo Spot can play the flash briefings from organisations like NDTV, BGR, India Today, Times Now and Aaj Tak etc.

If they don’t find the screen too small, users can actually play whole movies off PrimeVideo or watch clips from IMDB. Even while cooking in the kitchen, the Echo Spot can help by showing the user video recipes instead of just reading a recipe out loud. Amazon says that it's working on more customisation options for how recipes are displayed, including a play-by-play function.

It's worth noting that YouTube is still missing from the platform, following Google and Amazon's battle over their respective platforms.

Since the display is circular, users can zoom in so that the video can occupy the whole screen instead of wasting space in landscape mode.

Amazon claims that the Echo Spot, while still being a voice first device at heart, is meant to be even more personal than the other Echo speakers. The audio from the speakers is supposedly loud enough that the device can just rest on your kitchen counter or table top.

Having a display is all well and good, but the camera on the Echo Spot might be of concern to some users. The primary function of this feature is that it allows users to video call other Echo users using Alexa.

But that’s not where the problem lies. The issue is that having heard of instances where the smartphone camera or mic can record conversations covertly, one can’t help but cast suspicion onto the Echo Spot.

Amazon claims that it isn’t the case and to back that claim up, they’ve given a button on the device that allows users to electronically disengage the camera.

Aside from these two new features, the Echo Spot functions like the other Echo speakers. To talk to Alexa, users have to use the "Alexa" wake word. Alexa can then play music, make phone calls, send messages, answer queries, shop, and control other smart home devices.

Even third-party apps can function with Alexa thanks to the assistant’s own set of skills. Some of them include Uber, Ola, Zomato, and Goibibo.

Since Alexa’s launch in India, the digital assistant has consistently been learning and gathering information about Indian phrases and accents to personalise itself for Indian users.

Till last month, the Echo series was the only range of smart speakers available to the consumer in India. The Google Home and Home Mini, launched in April, took away Amazon’s monopoly in this segment.

Don’t know which one to get? Check out our reviews for the Google Home and Amazon Echo to figure out which smart speaker is right for you.