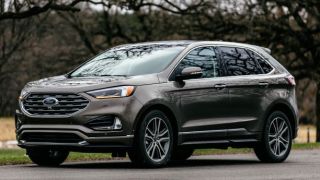 That seems to be the ultimate goal in the automotive industry, and if you are not quite on board with that technological evolution, you might want to avoid reading about the 2019 Ford Edge.

The newly designed crossover includes new tech called Evasive Steer Assist (ESA) and another one called Auto Emergency Braking (AEB). I tested both features for a week for the first time, enabling them during the entire test on lonely country roads, the highway, and around town.

To be clear, Ford is slowly introducing autonomous tech features for drivers who need an extra helping hand. ESA and AEB do not take over the vehicle for you completely, and do not “think” in the sense that you can take your hands off the wheel. However, they do definitely provide some extra torque for steering and rely on sensors to help you brake to avoid an accident.

I was impressed with how they worked, and even more impressed that it was obvious when these features were engaged and when they weren’t. In one instance, I was driving on a highway and a car started moving into my lane; I reacted by moving over to the shoulder, but the Edge obviously helped with an extra nudge. In another test that same day, I was coming up to a stop light and didn’t brake quite enough at first, and could tell the Edge was adding some assistance.

These are new sensations for me, even though I’ve tested pre-collision warning systems dozens and dozens of times, and have used the lane-keeping tech in cars for over seven years now. Infiniti was one of the first automakers to offer lane-keeping with a slight nudge to keep you from crossing a lane or into a shoulder, but this is different. The Ford Edge is doing something new.

“ESA works in concert with our other Pre-Collision Assist features [in the 2019 Ford Edge] to support the driver when he/she decides to steer around a potential collision,” says Chris Billman, Global Driver Assist Technology manager at Ford. “It does this by providing a small amount of ‘extra’ steering torque through the power steering system to lower the steering wheel efforts required to navigate around a collision and back into the original lane.”

So what does it actually feel like? In several of my tests, I could tell the Edge was augmenting my own driving. It was obvious that I wasn’t always reacting quickly enough to other cars on a busy commuter route when cars swerved into my lane. I have to say, I really like how it worked because it felt fluid and not so mechanical and abrupt.

Billman even explained that the nudge I was feeling was possibly not even the ESA system activating but the Lane Keeping System. (I’m convinced I was feeling ESA because it didn’t work the same as most lane-keeping.) It’s more like the car is helping you steer around something rather than moving you out of the lane.

And the automated braking also felt like the vehicle was doing some of the thinking. That’s the key--for most drivers, fully autonomous driving might be too innovative. Assists and augments will help the typical driver steer around problems and brake faster. For the future of driving, these 'accents' and aids may be exactly what most drivers need before cars completely take over.