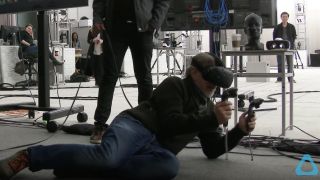 Ready Player One is a book and now movie all about virtual reality (VR), so of course a VR headset had to figure into the making of the film.

Turns out, HTC Vive was utilized by the filmmakers, including director Steven Spielberg, to see exactly what shots would look like in the film's virtual environment.

A new video published by HTC shows how the best VR headset was utilized in the movie making process. You can watch the video below – just know it's essentially a Vive promotion, though it does offer some insight into how VR technology was used to produce a sci-fi film.

Not only was a director avatar created so Spielberg could scout locations inside the virtual environment, but the actors also donned the HTC Vive so they could have a reference point for the motion-capture animation.

Some see VR films as the future of the movie industry, so it's intriguing to actually get a glimpse at how a major blockbuster film put a standard VR headset to use on set. We'll see if other directors pick up the practice any time soon.