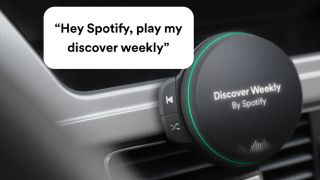 Remember that in-car player device Spotify was reportedly developing last year? It sounds like it's back on the agenda, with a potential launch happening some time in 2019 – bringing Spotify to your motor with no mobile phone required.

As per a Financial Times report, the tune-pumping add-on is going to offer voice control capabilities and cost you about $100 (that's roughly £75 or AU$140). It'll sync with your car stereo via Bluetooth, apparently, and offer quick access to your favorite playlists, though it doesn't appear to have a touchscreen or any display of its own.

What isn't clear from the anonymous sources speaking to the Financial Times is whether it'll have any 4G/LTE connectivity powers on board, or whether you'll need to load it up with tunes before you leave the house. It might also tether from a phone connection.

Keeping up with Amazon and Google

It's not difficult to see why Spotify would want to launch something like this, even though it's already relatively easy to get Spotify playing in a car through a phone – Alexa is in the car now, and Google Assistant is in the car now, so Spotify will want to keep up.

According to a special offer that leaked out to some Spotify users, the device in the pipeline will indeed have a cellular data connection for streaming on the go, which possibly points to an extra subscription fee – get the speaker and on-the-go data for a flat monthly fee on top of (or instead of) your existing premium subscription.

As yet there's no indication of exactly when in 2019 Spotify is going to unveil its in-car speaker, but considering how long these rumors have been swirling, we'd suggest it'll be sooner rather than later – giving you yet another option for music on the go.