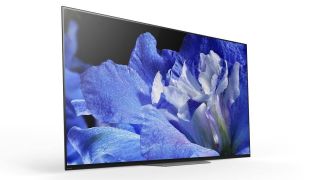 Japanese tech giant Sony has announced the launch of its Bravia A8F series in India, expanding its Bravia OLED range. The newly announced A8F series features a 4K OLED panel on the 55-inch KD-55A8F and the 64-inch KD-65A8F models.

Sony had unveiled the A8F series at the CES 2018 held in Las Vegas earlier this year. The Sony Bravia A8F series features Sony’s 4K HDR Processor X1 Extreme to offer 4K HDR viewing experience. It is also equipped with Acoustic Surface Technology which allows the TV to produce sound using the screen itself.

The A8F series has an integrated subwoofer behind the TV to produce deep and powerful bass. There are two actuators behind the TV that vibrate to produce the sound, which Sony claims is more engaging and results in a unification of picture and sound that is unattainable by conventional TVs.

At the front, the A8F series features a TRILUMINOS Display with 4K X-Reality Pro engine that uses Sony’s algorithm of reality creation database for any content to enhance the details. Additionally, it is equipped with the 4K HDR Processor X1 Extreme that incorporates technologies like Object-based HDR remaster, Super Bit Mapping 4K HDR and Dual database processing

The Sony A8F series runs on Android TV 7.0 with Sony’s user interface skinned on top, allowing users to watch movies and shows, view photos, search the web, play games and more. It has a built-in Chromecast, allowing users to share content from their smartphones and tablets. Additionally, the TV’s remote comes with dedicated Netflix and Google Play buttons.