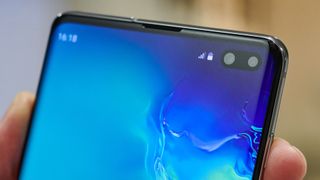 One of the biggest enemies of smartphone batteries are the phones' displays. They keep getting bigger, as demonstrated by the OnePlus 7 Pro's 6.67-inch display, and they need to be bright to be useful outdoors. That means even more energy use. But, a new OLED (organic light-emitting diode) technology could increase brightness and energy efficiency, Phys Orgreports.

The new OLED technology is being developed by a team at the Departments of Physics and Chemistry at the Imperial College London. They're using a special development process that results in OLEDs that give off a polarized light.

So, what's that all mean? Displays often include filters to help reduce glare from outside light sources (like the sun). These make it easier to see the light coming from your device's display, but they also can keep a lot of the display's light from coming through. Any light that doesn't make it to your eyes is essentially wasted energy.

By creating OLEDs that emit polarized light, the team at the Imperial College London can get the light from the OLEDs to pass through a polarized filter while external light sources will still get filtered by it.

What it means for you

For now, this won't mean much for the phones we have in our hands. Since it's still being researched, it's not likely to find its way into upcoming phones very soon. But, it could eventually reach consumer devices from phones and TVs to smartwatches and more.

When it does, it would result in brighter displays and improved energy efficiency. Displays would not need to use the same amount of energy to produce bright light since none of it would be filtered out. The new technology could almost double the efficiency of displays. And, that would mean much longer-lasting batteries for smartphones.

Plenty of phones already get a full day of life, but that could go further. This technology has promise in more areas as well. Smartwatches don't have the freedom to pack large batteries, so any efficiency improvements would have a strong benefit. And, while OLED TV screens offer impressive contrast ratios, they don't always keep up with peak brightness of their LCD counterparts. The ability to have none of the light intensity lost to a polarized filter could give OLEDd displays a huge step forward in catching up.