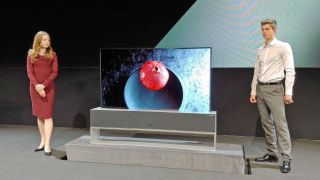 Are you looking for a rollable OLED TV? Sharp may have you covered, with the announcement that the Japanese electronics manufacturer has developed a 30-inch OLED panel able to unfurl out of its casing, and be rolled up into a compact scroll.

We've seen this kind of thing before, of course: the LG Signature Series OLED R has made headlines over much of the past year with its rollable form factor, though its initial 'late 2019' release date has yet to see the set brought to market – and has likely been pushed in 2020 for Western markets.

But Sharp's take on a rollable OLED panel differentiates in a few ways, and may be able to take some of the limelight away from LG's model.

For one, Sharp's model uses only a 30-inch panel, compared to the 65-inch TV made by LG. There aren't too many TVs made at that size these days, though the best small TVs are still sought after for their practicality – and Sharp is still packing 4K resolution into that small size.

That will make it far easier to fit into smaller homes that might actually benefit from a television that can be rolled out of sight when not in use. Sharp is also famously a budget manufacturer, and will be targeting an aggressive price point far lower than LG's high-end Series R set. (It will certainly still be more costly than the average OLED, though.)

Developed in conjunction with NHK – Japan's national broadcaster – the panel is also claimed to be "the world's largest color filterless (RGB light emission)" 4K display, meaning that the panel's pixels are able to emit colored light rather than projecting self-emissive white light through a colored filter (as in LG OLEDs).

There's no release date for Sharp's model thus far, and LG will almost certainly beat it to market, but with a more compact 30-inch sizing – appropriate for a rollable mechanism that is all about saving space – and a no-doubt lower price tag, Sharp may end up being the easiest avenue for rolling the technology out on a truly large scale.