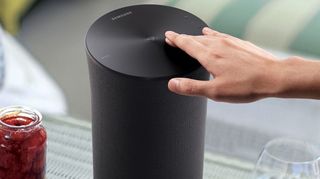 2018 could be the year that Samsung enthusiasts - particularly those who bought into Samsung’s SmartThings ecosystem - will finally get their comeuppance.

In a report from Bloomberg, sources told the publication that 2018 will be the year Samsung’s smart speaker should be announced and be available to buy - pointing to a release date in the first half of the new year.

While the sources couldn’t provide too many details on the shape, size or feature-set of the speaker, they did corroborate earlier reports that it would utilize Bixby, Samsung’s proprietary smart assistant that works like Apple’s Siri or Amazon’s Alexa.

The most interesting detail revealed in the new report was that Samsung plans on actually undercutting Apple’s smart home speaker, the Apple HomePod, by around $150 (about £100/AU$200). The Apple HomePod, which was delayed earlier this month, is targeting a price point of around $349 while Samsung’s Bixby-equipped challenger could be looking at a price tag of just $200.

That $200 price point would make it a bit more expensive than the Amazon Echo, which currently sits at $79, but that price could be justified by its feature set ... when that information finally becomes available to the public.

Shedding some light on Project Ambience

If this all sounds somewhat familiar, remember that back at Samsung’s Developer Conference the company showed off a Google Home Mini competitor that went by the name Project Ambience.

The speaker referenced by the Bloomberg story sounds different than the one we saw on stage in San Francisco, but the inclusion of Bixby as the speaker’s smart assistant is consistent in both cases.

If Samsung does target early 2018 as the release date for the speaker just like Bloomberg’s sources suggest, our money’s good that the speaker will make its debut at the upcoming Consumer Electronics Show (CES 2018) that takes place in Las Vegas, Nevada in early January.