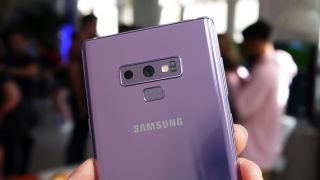 The Samsung Galaxy Note 9 and Galaxy S10 both have a camera lens that can do something most rivals can’t. Namely, it can shift between two different apertures, but for the Galaxy Note 10, Samsung might up that to three apertures.

That's according to @UniverseIce (a reputable leaker) citing "Samsung China engineers." Apparently, the Samsung Galaxy Note 10 will have a single lens that’s able to switch between f/1.5, f/1.8 and f/2.4.

Two of those are the same as we’ve seen on previous Samsung phones with a variable aperture, but the f/1.8 stage is new.

Aperture refers to how large the lens opening is and therefore how much light gets in. For night photography and other dark scenes you want to let a lot of light in, but for well-lit scenes it can be advantageous to let less in.

Aperture also affects the depth of field, so adjusting it can affect how much of a shot is in focus. Generally more is better of course, but for things like portrait shots you might want to blur out the background.

So in short, having a lens with three different apertures can potentially be almost as useful as having three different lenses. But the Samsung Galaxy Note 10 is unlikely to be limited to one lens.

Current rumors point to it having either three or four lenses, so if one of those also has three different apertures you can start to see how many photography options you might have to play with.

Of course, all of this is just rumors for now so we’d take it with a pinch of salt, but the three-stage variable aperture claim comes from a reliable source, and it’s a claim that makes sense, since Samsung has been using its dual-aperture trick for a while now, so it’s about time the company improved on it.