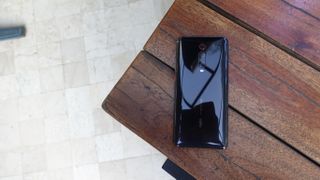 The upcoming Redmi K30 5G is slowly taking shape, as a new report suggests we will get a 120Hz display, a side-mounted fingerprint scanner and the new 60MP Sony IMX686 image sensor.

These hardware elements were spotted in the MIUI 11 nightly build code by XDA Developers and gave some explanation of why the device could be the Redmi K30. All the mentioned additions will appear in a Xiaomi smartphone codenamed “Phoenix”, and the code has graphical cues of a phone that looks like the Redmi K30, whose picture was shared by the company’s GM, Lu Weibing. Regardless, take these correlations with a grain of salt.

In the new MIUI 11 build, a new method called “isBroadSideFingerprint” was added, which returns true if the device name is “Phoenix” or “Picasso”. We don’t know much about Picasso at this point but it does share most of the aforementioned elements. “BroadSide” refers to the right side of the device, explains the string accompanying this code.

A graphic titled “core_scan_gesture_broadside” shows a device with a dual hole-punch display with a fingerprint scanner on the right side.

Considering that the Redmi K30 is the only confirmed device from Xiaomi’s portfolio to sport such a notch, it makes us believe that we are indeed talking about the same device.

Last month, news surfaced that Xiaomi is working on a smartphone with a 120Hz refresh rate display, after a hidden setting to force the display to render at 120Hz was unearthed. It understandably did not function as none of Xiaomi’s current smartphones crosses the 60Hz threshold.

However, a method called “isSuppotHighFrameRate” returns true if the device name matches “Phoenix”. This could very well mean that the Redmi K30 could be one of Xiaomi’s first phones with a high refresh rate.

Sony recently shared a bunch of sample shots from its upcoming flagship IMX686 image sensor, without touching upon any of the specifications. These were shared only on Weibo, which could imply that the first wave of IMX686-sporting phones will be in China. The only confirmed spec is that the sensor will be 60MP in size.

Qualcomm’s camera library for “Phoenix” includes strings labeled “phoenix_imx686”, “phoenix_s5k3t2”, “phoenix_gc02m1_depth” and “phoenix_gc02m1_front”. The S5K3T2 is a Samsung ISOCELL with a 20MP resolution and a 1/3.4-inch sensor size. This also technically confirms that the phone will have at least three cameras on the back and one on the front.

Expected to launch in December

The Redmi K30 is expected to be unveiled in China in December, with availability early next year. The “phoenixin” codename is also mentioned in the source code, which indicates that a variant of the phone destined for the Indian market also exists. It shouldn’t be long before we know everything about the successor to the Redmi K20 Pro.