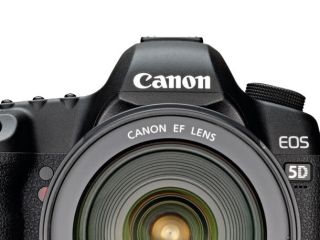 Let's take a closer look at some of the more interesting (and realistic) new camera rumours making the rounds.

What does 2012 hold in the way of new camera releases?

These are our predictions...

Could a Canon EOS 5D Mark III release date be just around the corner? We think so. Launched in 2008, the Canon 5D Mark II is due a refresh. Essentially just the innards of an Canon 5D inside a slightly spruced-up body shell, plus a 21-million-pixel sensor and a very cool (for 2008) video shooting function, the 5D MKII always looked like something of a compromise.

At this point in time, the 5D MK II lacks both the speed and enhanced functionality of the newer APS-C format EOS 7D, and the rugged construction and almost infinite customisation of Canon's professional EOS 1D series.

Expect an updated body shell, greatly improved AF (probably borrowed from the Canon 7D) and a tweaked video shooting capability. We'd also stick our necks out and suggest that whatever replaces the Canon EOS 5D MK2 will have the Canon 60D's (read our Canon 60D review) articulated LCD screen - but possibly with the addition of touch-sensitivity. If this turns out to be true, it would be the first full-frame camera to feature this technology.

A key change is likely to be an extension in the range of frames rates that are available at full resolution. Full 1080p at 60fps seems a safe bet.

Video Snapshot: We'd also like to see the inclusion and enhancement of Canon's Video Snapshot mode. In it's current incarnation in Canon's EOS 600D, Video Snapshot mode allows users to shoot snippets of video at predetermined lengths (2, 4 or 8sec), which are then stitched together automatically.

Canon may allow clips of different lengths to be combined and extend the level of in-camera editing of the clips to enable their order rearranged etc.

UPDATE - January 2011: The photography portfolio head of testing, Angela Nicholson, compiles her list of features she'd like to see on a Canon 6D release.

We're not expecting a Canon G13 release date in the immediate future, but if history is any guide, the next update to Canon's PowerShot G-series shouldn't be far off.

The Powershot G11 and recently released Canon G12 (read our Canon G12 review) broke the mould a little by offering a relatively low resolution of 10 megapixels, compared to the 14MP of the Powershot G10 - released in 2008.

The decision to move backwards in resolution was taken (according to Canon) for the sake of image quality. Fewer, larger pixels give better pictures, especially in low light. With the Canon PowerShot G13 release, we'd be surprised if Canon stuck with a 10MP sensor. We suspect the Canon G13 specs will include a 12MP+ sensor and possibly an improved video mode at the very least.

Something that we'd love to see changed in a Canon G13 is the Canon G12's most pointless optical viewfinder. It is small, blurry and inaccurate. We'd like a decent electronic viewfinder - preferably built-in, or as an optional accessory.

Having the finder as an optional extra would also allow the camera itself to be smaller. Right now the G12 stretches the definition of 'compact' - hopefully the Canon PowerShot G13 will see Canon's G-series move closer in size to the excellent (and pocketable) PowerShot S95.

UPDATE - January 2011: someone told us they couldn't find a Canon EOS 1Ds Mark III anywhere. So we searched ourselves, and sure enough they were right.

Most camera shops in the US and UK are out of stock in the Canon 1Ds Mark III. But perhaps the strongest signal that Canon 1Ds Mark IV release date is coming soon is that those retailers that do still have the 1Ds Mark III are selling it at heavy discounts. Watch this space.