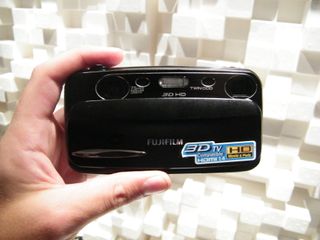 With 3D being the biggest technology bandwagon companies are currently jumping on, it, it's no surprise that Fujifilm has decided now is the time to refresh its 3D camera range.

The Fujifilm FinePix Real 3D W1 may not have got the adulation it should have deserved, given that it was the world's first 3D camera on the market, bringing 10MP shots that literally jump out of a screen.

But there were a number of problems, including the fact that you had to send off your images to Japan to get them processed on lenticular paper and there wasn't that many 3D TVs out in the market, when it was released back in February.

Skip to August and a 3D infrastructure is starting to slowly appear in the UK, what with all major TV manufacturers selling 3D TVs.

This is why the Fujifilm FinePix Real 3D W3 will achieve what its predecessor couldn't – bringing 3D photos to the mass market.

Looks-wise, the W3 looks very similar to the W1. The twin lens system is still there, although the lenses have been brought closer together to add a bit more clarity to the 3D image.

The LCD on the back of the W3 has also been improved, with the 3.5-inch screen looking noticeably clearer, while still offering the chance to view images in 3D without glasses.

The W3 is certainly thicker than most cameras at the moment and it is a whole lot heavier but given that there are two separate lens systems inside, the W3 is surprisingly compact.

It also offers all the functionality of a normal 2D camera, though you may get funny looks if you use it as an everyday point and shoot.

Taking shots with the W3 is now a lot simpler, thanks to the 3D Auto mode. While our first few images weren't the best when played back on Sony's HX803 – the camera has a mini HDMI 1.4 slot on board – but that was because we hadn't taken into account the 1.5 metres leeway you need to give foreground images that 3D punch.

Once we mastered this little rule of thumb, vans, bikes and even a passing police van looked good and lifelike when viewed through active shutter 3D specs.

One of the bonuses of the W3, compared to the W1, is that you can also film 3D HD footage of the camera. This means that you can now create 3D video with instant playback.

You don't have to worry about filming the same stuff in 3D and 2D either, as the camera will do this automatically for you if you so wish.

And the added bonus is that you will also be able to get your lenticular photos printed out in the UK.

UK release date for the Fujifilm FinePix Real 3D W3 is September and the camera will be priced at £399.