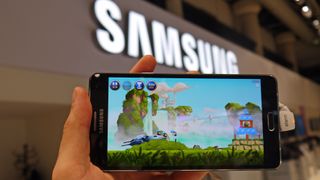 A little under a week ago Samsung bought up Korean firm LoopPay that has a technology which replicates a card swipe and is compatible with credit card readers already found in stores around the world.

Samsung has yet to reveal its intentions with the company, apart from the fact it will remain independent to Sammy, but many have theorised the company is working on its own competitor to Apple Pay.

An anonymous industry source told the Korea Herald: "Samsung's Lee may have asked for business advice from Thiel, who is an expert in FinTech [financial technology]. Expectations are high that Samsung will soon launch a new competitor to Apple Pay."

It only piles on more evidence that Samsung is working heavily on adapting the LoopPay technology into its own competitor to Apple Pay.

The main question is whether Samsung Pay, or whatever the company decide to name it, will be launching on the Samsung Galaxy S6 which is set for a March 1 launch.

Last year's Galaxy S5 came with a fingerprint sensor built in, could it have been preparing for mobile payments in a similar way Apple did with Touch ID on the iPhone 5S?

Our guess would be it isn't purely because all of this has happened in the last week and the company has surely finalised the features of the Galaxy S6 a few months back.

Samsung Pay will likely have a big advantage over its big competitor as it doesn't require merchants to have dedicated systems installed.

Apple Pay however requires specific POS terminals for the mobile payment system to be used.