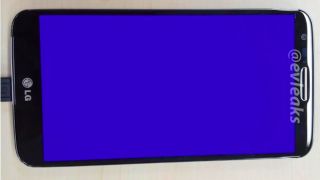 It's (possibly) so blue!

An online filing and a mysterious page on Sprint's website today may have provided further clues about the state of LG's Optimus G2.

The G2 has popped up several times in recent days, and today's apparent leaks only add to the device's mystery.

Android Police first spotted an unknown LG smartphone with the model number LS980 on Bluetooth.org, the website of a Bluetooth special interest group with members like Intel, Lenovo, Microsoft, Motorola and Nokia.

Speculation suggested then that the unknown device was a version of the Optimus G Pro for Sprint, but further evidence emerged to point instead to the Optimus G2.

LG confirmed in April that the Optimus G2 will be the South Korean phone maker's next flagship, but the Android device has to make any official appearances.

The G2 may have appeared twice already this month though, with a photo leaking through @evleaks and three possible variations appearing over the weekend.

Today's Bluetooth filing exposed the device with the model number LS980, which Android Police assumed to be the Optimus G Pro for Sprint because of that phone's AT&T model number of E-980.

So if the LS980 is Sprint's version of the Optimus G Pro, then it will come with a newer version of Android than the AT&T version. Otherwise we're dealing with a different device altogether - namely, the Optimus G2.

Further evidence and sleuthing in the comments section unearthed a cryptic official Sprint page that may have revealed that the LS980 will feature a Snapdragon 800 series MSM8974 chipset - one that's not even out yet, suggesting this device is still a long way off.

The evidence doesn't point to anything conclusive, but we'll keep an ear to the ground until LG says something official. In the meantime, Sprint has informed us once again that the company doesn't comment on rumors or speculation about unannounced devices.