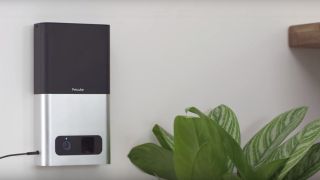 There are few things we wouldn’t do for our furry friends, but staying at home and playing with them all day just isn’t an option for most of us. That’s where Petcube comes in, with its popular range of security cameras that lets you speak to your pets while you’re away, as well as giving out treats and turning on connected toys.

The new, wider camera means that you can see the whole room, and with full duplex sound, a four microphone array, and speaker bar, your pet can hear you better than ever before.

Perhaps most exciting is the inclusion of Alexa, which means you won’t need a separate Amazon Echo speaker to tap into the super smart voice assistant’s powers.

Check out the new Petcube devices in action below:

Via Alexa, Petcube owners will be able to do everything from playing music to checking the news, as well as flinging treats or playing with your furry companion. As with the previous models, your pet can initiate a two way video call when it sits in front of the camera – when this happens you’ll receive a notification on your phone prompting you to accept a call from your animal friend (as if anyone is going to decline that call).

As well as that, Petcube Bites 2 has been given a more compact design, and can support a wider variety of different sized treats, while the Petcube Play 2 features a more precise laser toy to keep your pet occupied while you’re away.