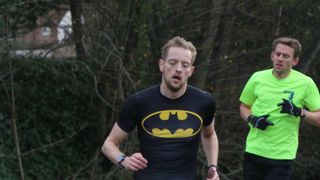 I didn’t sleep well last night. I’d tried to go to bed at half nine, about two hours earlier than usual, to prepare for pre-race night where I’ll need to be up at 5AM.

But I couldn’t slip into slumber because I was busy doing mental calculations and dealing with these little thought demons:

‘I should start fast.’

'I should start slow’

‘I should run well until mile 13 and see where I’m at then completely redesign every pacing strategy I’ve ever run with while trying to run a marathon.’

‘I should just run without any tech and do it all on feel. I should do a whole marathon training cycle like that - it’d be a great feature.’

I didn’t come to any good conclusions oddly -  it turns out that defining the way I’m going to run for three and a bit hours isn’t really possible in the dark late at night.

The problem I’ve got is the same as every runner I know doing the marathon: you don’t want to go too fast and blow up at 20 miles, run-walking to the finish.

But equally, it would be uncomfortable to get to the end in good shape and realise you’ve left any time out there, especially when I’m so tantalisingly close to the sub-three hour mark.

That’s partly the issue here: that all the stupid runners have a small, muscular ‘hero’ on their shoulder, whispering about glory if they’re just willing to try that little bit harder than ever before.

It’s very easy to listen to that person at the start, less so when you’re weeping on the pavement at mile 18.

Well, what should I do? A wise woman at my running club recently told me 'the best marathon you can run is the one where you don't care'.

So the sensible answer is simple: pick a time I think is possible and stick with it.

But the thing with training is that the time you can achieve is mysterious - it evolves depending on what you’ve done.

Let’s begin with some bigger data. According to Strava’s data from analysing the London Marathon in years gone by, the stats don’t tell a good picture: runners in my age bracket of 25-34 are the slowest on average and least likely to achieve their goal pace.

But HA! I’m nearly too old for that age range, so there’s more chance of beating the statistics. For once, I’m not grumpy about the slow fingers of death reaching towards me.

OK - what about the time itself? I’ve sniffed out a few online calculators that go beyond the traditional rules of thumb (such as taking a recent half marathon race, doubling the time and adding 10 minutes) to offer more qualitative results.

The best is from FiveThirtyEight, where it asks for information on two recent races, a weekly average mileage number from training and feedback on how those races were.

According to that calculator, I should be aiming for a 3hr12 finish. Eep. Even if I start getting stupid and put in my personal best (PB) for the half marathon in there, it only drops to 3hr07. I would apparently need to run around 60 miles per week to get close to my target.

TOO LATE FOR THAT NOW.

My little hero is telling me that, clearly, I’m the exception here. My marathon PB, set last October, was 3hr09 - and that was off poor training. (We’ll gloss over the fact that with proper training earlier in the year, I only managed 3hr23).

So clearly, with all the excellent training I’ve done (ignoring that it’s made me slower) I should be faster, so 3hr05 is a ‘realistic’ target. In fact, I’ll probably get to halfway and feel so good that I’ll be able to make up the few minutes needed to go under three hours. This will be great.

That means the next question is: how to run this race? Well, all the decent marathon runners and scientific data tells me that the best way to run a marathon is at an even pace.

There’s an excellent breakdown of pacing at the London Marathon by Barry Smyth, Professor of Computer Science at University College Dublin over on Medium, where he’s taken the pacing of the average runner, those that set a PB and elite runners who are probably quite good at this.

The data shows clearly the phases most runners will experience: early excitement where they running 15-20% faster than their (eventual) average speed, the pace-dropping panic as the miles close in and then a destructive finish as the jaws of the marathon clamp down around mile 20, chewing them so hard until they’re only able to stumble across the line.

But then we see the elite runners pacing, and the level of control there is what stands out. They’ll never run more than 5% faster than average pace for the first half of the marathon, have a little acceleration at halfway before slowing slightly for the rest of the race, with enough left in the tank for a fast finish.

OK - that’s excellent stuff. It’s OK to run a little faster in the first half, but no more than 5% faster than my intended time. I can do that.

But that doesn’t account for the most important part of my race: my mental fatigue. Every runner knows that a positive frame of mind will fill every muscle with freedom, make you feel like you’re being guided on a cloud pushed by singing angels.

The key thing with any pacing plan is to make sure I feel in control of it, that every mile feels utterly possible and - dare I say it - fun.

But a negative headspace, where the weight of an expected pace crushes your spirit, is horrendous.

I’ve done five marathon distances, and the most positive ones have always been me holding back at the start then battering out as much speed as possible.

My recent PB marathon was by far the best I’ve felt during the run: I ran two miles at 5k pace to tell my body that it needed to get into race mode. Then it was 6 miles of constantly trying to hold the speed back, dropping the pace right down and feeling like I was caged.

I had a trigger song ready, and the second I heard Bonnie Tyler’s ‘Holding Out For a Hero’ I knew it was time to drop the hammer. I flew along for the next nine miles, feeling brilliant and watching the miles tick down.

The last six miles weren’t pretty at all - but I can barely remember anything other than a massive hill, welling up as I passed the 25 mile marker and then cramping as I tried to sprint to the finish.

But the reason that went so well was - like that smart woman said - I had no idea of my planned time. I’d trained for other races and this was an afterthought, and yet I performed far better than I could have even dreamed.

‘You could just follow the three hour pacers and hold on as long as possible. No guts, no glory, eh? Can’t take effort home with you, eh? When your legs get tired, just run with your heart, eh?’

I'm going to take my PB pace (7:14 per mile) and stick to it religiously. No worrying about a fade or half distance efforts or needing to make up time at the end. Start easy, finish hard.

If you've got any tech questions ahead of the big day - or just about running in general - feel free to get in touch using the links below, or the email address in my author bio! It'd be great to answer some direct questions from runners over the next few days.