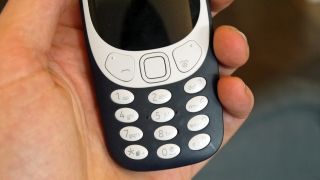 You may have thought that physical smartphone keyboards were dead aside from BlackBerry's dogged releases like the KeyOne, but an upcoming Nokia device might also be bucking the touchscreen trend, at least according to a source who spoke with Nokia Power User.

The rumors follow the recent US Federal Communications Commission (FCC) approval of a new phone called the 'TA-1047'. Details are scant, but the documentation refers to a smallish phone that's only 133 x 68mm (5.23 x 2.67 inches), and, well, that's about the only information we know.

When the news dropped, most speculation assumed it would be another Android-powered phone with thinner bezels in line with the usual trends.

But according to "an educated guess by a well-known source that has been behind many Nokia leaks," the phone may actually end up being a device with a 3.3-inch, 480 x 480 resolution screen and (shocker) a physical QWERTY keyboard.

The source also claims the TA-1047 will possibly be powered by a weak Qualcomm 205 processor and host a operating system known as 'Kai OS'.

Kai could be a highly customized version of Android or a redesign of the Series 30+ OS seen in the Nokia 3310, but the documentation provides no clue. We've heard about the Firefox OS-based 'Kai OS' in news about the JioPhone, but it's not clear if "well-known source" is referring to the same thing.

A lack of tact

A new (and likely inexpensive) smartphone with a tactile keyboard sounds interesting, but there's a chance many of us will never see it anyway.

Even though the product was cleared by the FCC, GizChina spotted a passage in the cover letter to the FCC that explicitly states the device will not be available in the US market.

Again, this is all speculation, and from a nebulous source at that. But if the TA-1047 does turn out to have a tactile keyboard, it proves that someone other than BlackBerry is willing to carry the torch for whatever reason. Whether it's worth it remains to be seen.