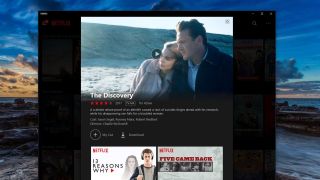 Netflix has finally updated its Windows 10 PC app to support offline viewing. Available via the Windows 10 Store on PC devices (including tablets), the update allows you to download select movies and TV shows for later viewing.

As Windows Central reports, the selection is currently limited to Netflix originals and a few outliers, which is a bummer. But it shouldn’t be long before Netflix works out whatever licensing hurdles are preventing the offline download expansion, as many film houses have already permitted this on mobile devices through Netflix.

You can see plenty films and TV shows that aren’t original to Netflix in a new “Available for Download” menu option, but even now only a scant few are available to actually, well, download.

The change makes itself known with a small button next to the listing option underneath a selection’s title card. There’s an area for managing your downloaded content as well.

While iPad and other tablet owners have enjoyed this feature for a while, this is (literally) big news for frequent travelers with Windows 10 laptops or 2-in-1 laptops. Watching Netflix on a 9.7-inch screen is fine, but pretty much anyone would prefer a 13-inch or larger, no?

This major update comes just days before the Windows 10 Creators Update is available for direct download – a good time to be a Windows fan.