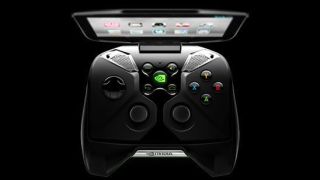 A Shield tablet may soon join this little guy

A mysterious new Nvidia-made tablet that popped up on a benchmarking site this week could be a Nvidia Shield tablet meant for gaming.

The device, which appeared on GFXBenchmark with the name "Nividia Mocha," was pegged with a 7.9-inch 2048 x 1536 display and Nvidia's impressive 2.1GHz quad-core Tegra K1 chip.

Not much else is known about the unannounced tablet, but a site called Fudzilla claimed this week to have "confirmation" that it's actually a Nvidia Shield tablet.

The tablet will reportedly join the ranks of the Android-based Nvidia Shield gaming handheld and, assuming that, we can begin to guess at its feature set.

The Tegra K1 processor, with its 192-core GPU, would alone make a possible Nvidia Shield tablet an impressive gaming slate.

But assuming this tablet follows in the original Nvidia Shield's footsteps, the Shield branding brings at least one more important feature for gamers: GameStream.

GameStream lets users with specific chip sets in their gaming PCs stream titles to Shield. This doesn't quite let players take triple-A PC games on the go, but it does let them take those games over to the couch.

Of course if it's anything like the existing Shield, this tablet will also be able to play Android games, making it a versatile little gaming gadget.

Besides those guesses, the Nvidia Mocha was originally benchmarked with around 2GB of memory and 16GB of storage.

It's anyone's guess when we might hear more about this device - assuming there's more to hear - but E3 2014 is right around the corner.